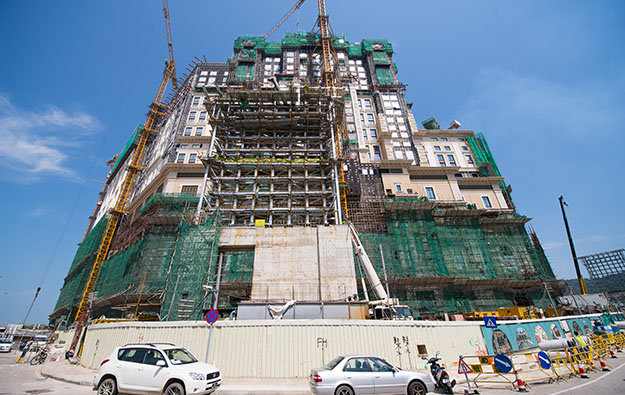 It is “very unlikely” that Macau casino operator SJM Holdings Ltd will be able to stick to its plan to open its new Cotai casino resort in the second half of 2018 – as pledged recently by its chief executive – says a note from brokerage Sanford C. Bernstein Ltd.

The institution expects Grand Lisboa Palace (pictured), SJM Holdings’ first foray into the mass market-focused Cotai district, will instead launch in early 2019, one calendar year before the company’s current casino concession is due to expire.

The Sanford Bernstein memo downgrades the operator’s stock to ‘underperform’ from ‘market perform’, citing that factor and others. They include falling market share; overreliance on a single junket firm for its VIP business; “convoluted” management structure; and the role – within the group’s market coverage – of low-yielding satellite casinos run by the third parties.

Work restarted on August 2, with Ambrose So Shu Fai, SJM Holdings’ CEO, stating that day the firm would “readjust the construction programme and try to catch up” with its stated target of a second-half 2018 launch.

“While the company is still sticking to its second-half 2018 opening, we view this as very unlikely,” said the memo from Sanford Bernstein’s analysts Vitaly Umansky and Zhen Gong. “Based on our research, we estimate that the property will not open until early 2019 and adjust our model to reflect this view,” they added.

Sanford Bernstein also said it had “strong concerns” about how quickly gaming and other business at Grand Lisboa Palace – which the promoter has said will have capacity for 500 gambling tables – will be able to “ramp up” operations.

The brokerage said that while SJM Holdings’ stock has “rallied 15 percent year to date (in line with the Macau group average) … this rally is unwarranted”.

“We see little to excite us in the near term, even if the stock looks relatively ‘cheap’ as some investors continue to argue. Certain stocks are ‘cheap’ for a reason – we think this is one of them,” said Mr Umansky and Mr Zhen.

The brokerage said that – even taking into account the launch of Grand Lisboa Palace – it forecast compound annual growth of “only 5 percent” in the casino firm’s earnings before interest, taxation, depreciation and amortisation (EBITDA) for the period 2016 to 2019, “well below our estimate for the Macau industry of 12 percent”.

“SJM has the lowest [Macau market] table utilisation (win per unit per day) in both VIP and mass, which highlights lack of operational efficiency and lower spend by customers (and/or fewer customers),” stated the analysts.

“Being late to Cotai leaves SJM playing catch up, while a lack of experience in running an integrated resort raises concerns once Grand Lisboa Palace actually opens,” said the analysts.

“The recent departure of a top executive (senior vice president Andrew Billany) is a negative and the replacement of a legacy director of the SJM board with Daisy Ho [Chiu Fung]… is not in any way an indication that things are about to change,” said Mr Umansky and Mr Zhen, referring to the June appointment to the board of a daughter of 95-year-old Stanley Ho Hung Sun, SJM Holdings’ founder.