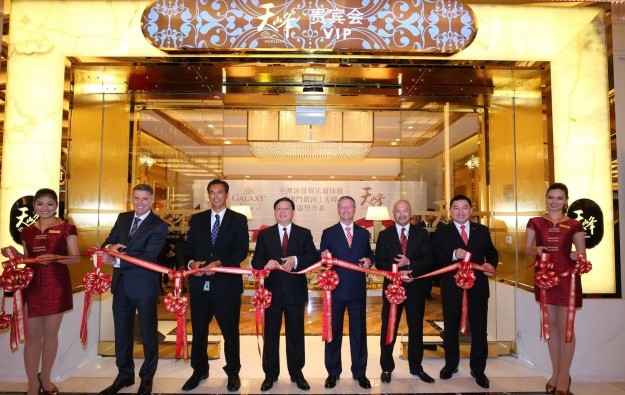 The facility, called Horizon VIP, has 19 tables and three private gaming rooms. Although carrying the initials ‘VIP’ in the title, the facility is for cash play rather than for customers brought in by junkets under the local industry’s rolling chip programmes.

The zone – screened from the true mass floor and with a concierge service – is only for invited guests. Black card and Diamond card level customers signed to the company’s player membership scheme, the GEG Privilege Club, will be entitled to use it.

Raymond Yap Yin Min (pictured centre, left), Galaxy Entertainment’s senior vice president in charge of premium market development, declined to put a specific figure on how much players needed to spend in order to qualify for those tiers and for Horizon VIP entry, but pointed out that as a premium mass play area, the players would need to meet the table minimum bets stipulated for the Horizon VIP area by the resort’s management. Table minimums on main casino floors in Macau can fluctuate depending on demand or the marketing goals of the operators.

Several investment analysts have stated that they hope to see gaming performance at the HKD19.6-billion Galaxy Macau Phase 2 and the HKD5-billion Broadway at Galaxy Macau ramp up soon. The two properties opened on May 27, but even the firm’s chairman Lui Che Woo has been quoted saying that Galaxy Phase 2’s performance has been “satisfactory, but not as good as what we expected”.

Macau market wide, has seen gaming revenue fall 37 percent year-on-year in the first six months of 2015 according to official data, as the effects of an anti-corruption drive in mainland China and a slowdown in the Chinese economy linger. The pace of decline did slow slightly in June, leading some analysts to ponder whether a turning point has been reached.

But a note on Wednesday from analysts at Morgan Stanley Asia Ltd said investors were “too focused on weekly data for signs of bottoming revenue,” and that market wide in Macau “the key risk of significant margin dilution and cost pressure in a declining revenue environment is under appreciated”.

On Friday, Galaxy Entertainment’s Mr Yap was asked about comments from analysts suggesting specifically that Galaxy Entertainment’s margin on EBITDA (earnings before interest, taxation, depreciation and amortisation) might be pressured in the second quarter because of expenses associated with the opening of the firm’s new venues.

He said: “You have to wait for our announcement on the second quarter. But I suppose that in the industry everybody knows the situation now. We just have to make sure that we optimise our tables, our staffing and optimise everything we have built here, for better profitability.”

He added: “Just as with any business, there’s a down and an up, but we are very optimistic about the prospects of the Macau industry. And with the support of the [Macau] SAR government and the Chinese government, we are quite sure that we [as an industry] will be able to work [our way] out from the downturn very soon.”

Horizon VIP also has what the firm’s management described as six “private salons” each with a dining table. The area also has a dedicated menu with 128 food items.

Mr Clayton also told GGRAsia on the sidelines of Friday’s event that Sky 88 – a luxury premium mass gambling facility planned for the new Ritz-Carlton hotel tower at Galaxy Macau Phase 2 – is yet to open.

“It’s still under development,” said Mr Clayton, who had previously confirmed that it would be specifically for Diamond card customers.

Singapore has the potential to be a “top choice” for Chinese outbound travellers, once the country reopens and eases travel restrictions associated with the Covid-19 pandemic, suggested... END_OF_DOCUMENT_TOKEN_TO_BE_REPLACED