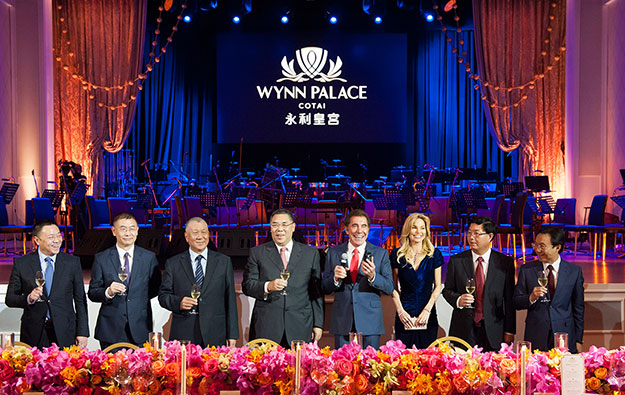 Hollywood glamour was added to the opening night dinner, with an appearance by actor Arnold Schwarzenegger. After dinner entertainment included performances by Italian tenor Andrea Bocelli and Hong Kong-born entertainer and singer Coco Lee. The latter also happens to be the wife of one of the non-executive directors of Wynn Macau Ltd.

All areas of the gaming operation – including the mass floor, premium mass sections and VIP rooms – were well populated following the property’s opening to the public at 8pm. Some baccarat tables on the main floor had clusters of players standing two or three deep, ‘back betting’ on what they perceived to be players on a lucky streak that were sitting at the table. That was despite those particular tables offering minimum bets of HKD1,000 (US$129) per game.

Analysts at Morgan Stanley group had said in a Monday note – citing conversations with management – that the 1,700 rooms at Wynn Palace were running at 80 percent occupancy for the first few weeks.

It is common for new Macau properties to have an opening ‘bounce’ in business. But a number of investment analysts have expressed concerns that the modest new-to-market live dealer table allocation for Wynn Palace by the Macau government – 100 at opening, for a US$4.2-billion capital spend, with 50 more tables in two increments – comes against the background of 26 straight months of year-on-year GGR decline in the market.

Several brokerages have expressed concern that Wynn Palace could have difficulty in ramping up its business quickly, and that even if it does, it could cannibalise its promoter Wynn Macau Ltd’s existing gambling business at the Wynn Macau casino hotel on Macau peninsula.

A note issued on Tuesday by brokerage Sanford C. Bernstein Ltd was however positive about Wynn Palace’s contribution to the local market.

“Steve Wynn and his team have built a masterpiece of a luxury integrated resort, or as they were called in the 1990s in Las Vegas – a ‘Super Casino’,” wrote analysts Vitaly Umansky and Clifford Kurz.

“Based on what we have seen, we expect Wynn Palace to be a game-changing addition to Wynn Macau and allow the company to strongly compete in Cotai in both gaming and non-gaming,” they added.

“We estimate Wynn Palace to generate property EBITDA [earnings before interest, taxation, depreciation and amortisation] of HKD5.3 billion in 2017, which will result in a return on investment in the mid-teens [of percent],” said Mr Umansky and Mr Kurz.

The brokerage additionally noted: “While Wynn peninsula [Wynn Macau] will suffer cannibalisation as we had always thought, the increased table shift from the peninsula [the Wynn Macau casino hotel] to Palace should not materially impact our forecast for that property.”

Among the official guests for the opening night dinner were: Macau’s Chief Executive, Fernando Chui Sai On (pictured centre, left); the city’s first chief executive following the 1999 handover from Portugal, Edmund Ho Hau Wa (pictured third left); Macau’s current Secretary for Economy and Finance, Lionel Leong Vai Tac, who oversees the gaming industry; and the Secretary for Social Affairs and Culture, Alexis Tam Chon Weng, who has a say in Macau public policy on smoking – including whether it should be banned completely from casinos. The Macau government in 2015 submitted to the city’s Legislative Assembly a bill proposing a total ban on smoking inside casinos. Legislators approved the first reading of the bill in July last year.

Other attendees at the Wynn Palace opening night dinner included Yao Jian, deputy director of the Liaison Office of the Central People’s Government in Macau.

Among the non-gaming features of the resort are what the property promoter describes as an eight-acre (3.2-hectare) “Performance Lake” and fountain show, and a gondola ride that allows visitors to see the fountain display from 90 feet (27 metres) above the lake.

The imminent return of package tours from mainland China will not only help boost Macau’s tourism businesses, but is also expected to help casinos gain more foot traffic in their mass gaming... END_OF_DOCUMENT_TOKEN_TO_BE_REPLACED