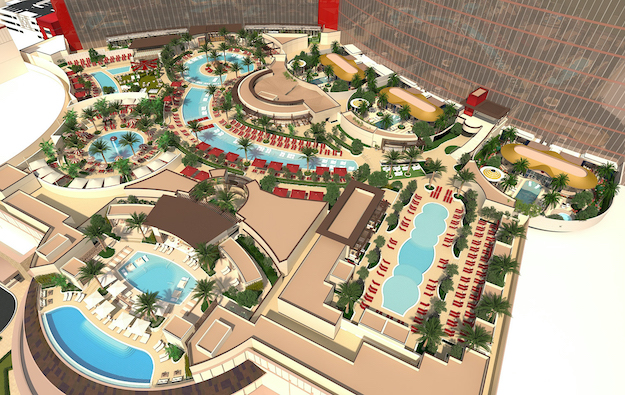 A press release on behalf of Genting Bhd has apparently confirmed a US$4.3-billion budget for the Resorts World Las Vegas casino resort (pictured in an artist’s rendering) being developed in the Nevada, United States gambling hub by the Malaysian conglomerate.

It said the property was likely to open in the “summer 2021”.

No information was given about specific numbers of tables and slots for the casino.

The release stated the “Asian-inspired” property would have two towers housing 3,500 guest rooms.

Other facilities due to be offered at the property – which will be on land once occupied by the abandoned Echelon scheme on the Las Vegas Strip – include a 5,000-capacity theatre for entertainer residencies and corporate events; a 50-ft diameter video globe which will display over 6,000 sq ft of LED content; and luxury suites, villas and penthouses offering access to a “sky casino”.

Scott Sibella, president of Resorts World Las Vegas, said in prepared remarks in the press release that the venue’s promoters were “excited to begin sharing [its] concept with Las Vegas and the greater hospitality communities.” He added the property would seek to “redefine the luxury hotel standard in Las Vegas”.

Mr Sibella, a former MGM Grand president and chief operating officer, is one of several ex-MGM Resorts International executives hired for the scheme.

In January it was announced that a legal row with market rival Wynn Resorts Ltd about the look of the new property – and that threatened to stop work on the Resorts World Las Vegas casino resort – had been settled.