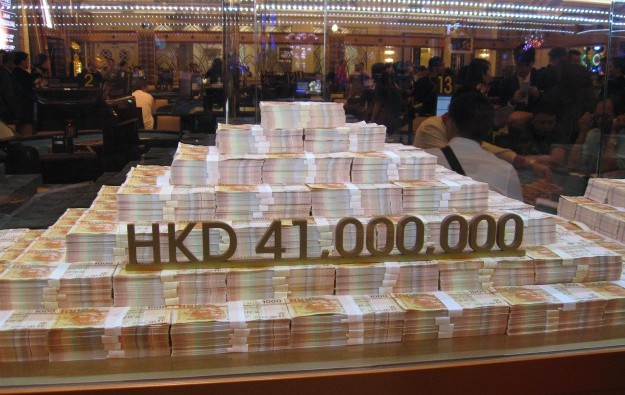 What is described as the “richest and biggest ever” baccarat tournament in Macau began on Thursday.

World Baccarat Master of Macau – held at Galaxy Entertainment Group Ltd’s Galaxy Macau casino resort in Cotai, and at StarWorld on Macau peninsula – has a total prize pool of HKD41 million (US$5.3 million).  The biggest prize pool recorded so far globally for No Limit Hold’em poker is US$82.5 million for the World Series of Poker Main Event in 2006.

But Galaxy Entertainment’s event is targeted at an important demographic in Asian gambling markets – elite baccarat players who regularly leave large sums at the casinos. The firm thinks the event could attract as many as 4,000 entries per month during the eight months of the contest.

The prize pool money (pictured above) was on display at the contest’s launch at Galaxy Macau.

For eight months starting from now, there will be three days per month of qualifying tournaments.

The top players in each monthly round win HKD1 million cash and go through to the Master Championship Tournament in April 2015 to compete for the HKD5 million top prize and a champion’s diamond ring commissioned from Hong Kong retailer and goldsmith Lukfook Jewellery.

Raymond Yap Yin Min, Galaxy’s senior vice president in charge of premium market development, said in a speech at the opening ceremony, that it was the first of a series of ‘World Master’ events planned by the casino firm. Others will include a World Slot Master of Macau slot tournament. There will also be World Master initiatives for food and beverage offerings and events and entertainment, said Mr Yap.

The imminent return of package tours from mainland China will not only help boost Macau’s tourism businesses, but is also expected to help casinos gain more foot traffic in their mass gaming... END_OF_DOCUMENT_TOKEN_TO_BE_REPLACED