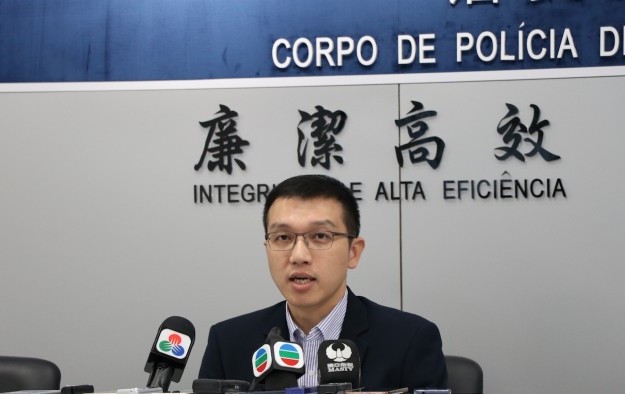 Macau police confirmed on Wednesday that casino chips with a face value of nearly HKD47.9 million (US$6.1 million) were stolen from a Macau casino on Tuesday.

The Judiciary Police did not identify the casino involved. But when GGRAsia approached Wynn Macau Ltd, following rumours on social media that it had been the victim of the heist, the company told us via email: “The matter is now being handled by the police.” It did not provide further information.

In the force’s regular press conference on Wednesday, Eric Choi Ian Fai (pictured), a spokesperson for the Judiciary Police –  a body also known locally as the PJ – said the suspected perpetrator, a male Macau resident reportedly working as a dealer at a VIP club in the casino, allegedly stole the gaming chips and put them in a bag before exiting the property.

The police spokesperson said that after a review of surveillance footage at the casino, there was no evidence to suggest the suspect was armed or had used force in the alleged incident – a rumour circulating on some social media.

The suspect was still at large and the force was still trying to determine whether the person remained in Macau, said Mr Choi.

The Judiciary Police spokesperson additionally stated that, since the force was still investigating the alleged crime – and that it might involve more than one person – the force would not release further information because of the risk of hindering the enquiry.

The police representative stressed that security inside local casinos was the responsibility of each venue respectively.

“Although there are PJ officers stationed at the casinos, they will only carry out operations when notified by the casinos’ security personnel that some incidents have occurred,” Mr Choi said.

Earlier on Wednesday, a purported wanted notice featuring the image of a male said to be involved in the incident was circulating on the Internet. Posters claimed it contained personal information on the man. But the police representative denied that such an image had been issued by his department.

During the first nine months of 2017, the Judiciary Police opened a total of 1,323 gaming-related crime cases – a number inclusive of launched investigations and reports made to the force – said Macau’s Secretary for Security, Wong Sio Chak, in a November media briefing. The tally represented a 1.9-percent year-on-year rise.

The local casino regulator, the Gaming Inspection and Coordination Bureau, issued a statement on Wednesday saying it had asked the casino operator at the centre of the latest incident – though did not name it – to submit a report on the matter. The gaming bureau also said that subsequent to the alleged incident it had a meeting with all six Macau operators and asked them to step up the surveillance effort in their properties.