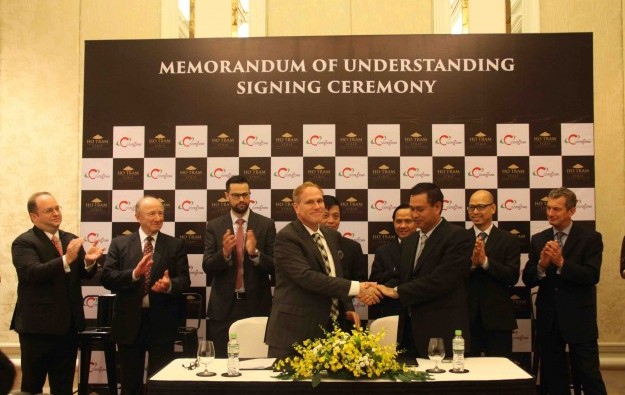 According to Wednesday’s release, CotecCons built the resort’s existing hotel tower – known as The Grand. The hotel and the casino opened in July 2013 – with 541 five-star rooms and permission for up to 90 gaming tables. Currently under Vietnamese law, the casino is only allowed to serve foreign players.

“This is an exciting new phase of a relationship that commenced more than seven years ago and sees us embark on a journey that takes us from client and contractor to partner and partner,” the chairman of CotecCons, Nguyen Ba Duong, was quoted as saying in Wednesday’s announcement.

The MOU signing ceremony (pictured) was held on Wednesday during the Ho Tram Open golf tournament staged at The Bluffs – the resort’s 18-hole Greg Norman-designed golf course that opened in October last year.

The proposed residential towers at the property will hold between 700 and 900 condominiums, said a press statement issued on Wednesday on behalf of the resort.

The real estate will be marketed to local and overseas investors, said the release. It did not mention a cost for the residential towers.

CotecCons is also working on a second hotel tower at the resort – which will have 559 rooms – and the development of some villas, added Wednesday’s statement.

Matthew Underwood, a spokesman for the Ho Tram Strip, told GGRAsia on November 9 that a firm completion date for the second hotel tower was still to be announced.

The capital injection was described as the second tranche of a total of US$100 million in fresh capital committed to the project by Harbinger, a firm founded by U.S.-based investor Philip Falcone.

“We have to acknowledge the monumental role that CotecCons has played in the development of this property,” said Michael Kelly, executive chairman of Asian Coast Development, in Wednesday’s statement.

Vietnam media outlets reported in August last year that the country’s Ministry of Finance had completed a draft decree that could allow Vietnamese nationals to gamble in casinos at home.

The Vietnamese government should release in the first half of next year a new set of rules to promote the development of the country’s gaming industry, stated Augustine Ha Ton Vinh, an academic who says he is advising the government on liberalising Vietnam’s gaming industry.

The new rules would in likelihood halve the current US$4-billion minimum required capital investment for each of the country’s integrated resort licences and allow Vietnamese nationals to gamble at home, said the academic

The long-awaited new outdoor theme park at Resorts World Genting, Malaysia’s only casino resort, is impressive, but likely to be “loss-generating due to heavy depreciation”, says a Thursday... END_OF_DOCUMENT_TOKEN_TO_BE_REPLACED