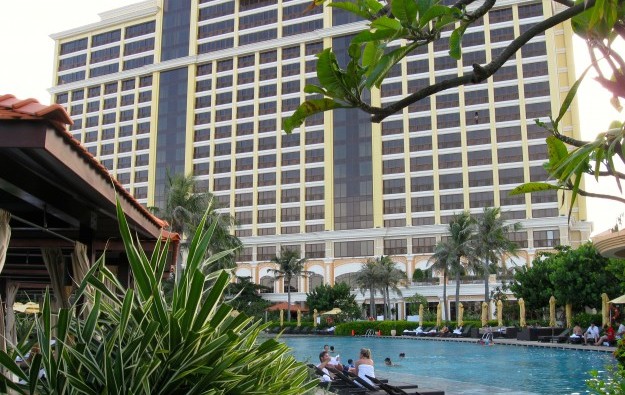 An established Vietnam casino resort with foreign investors has dropped the “Grand” portion of its name. It is now known as Ho Tram Resort Casino, although no formal announcement has been made about the change.

The first phase of the resort (pictured) opened in July 2013 under the name “The Grand Ho Tram Strip”. It had originally been due to be branded “MGM Grand Ho Tram” but in March 2013, U.S.-based casino operator MGM Resorts International pulled out of an agreement to brand and manage the resort. It told Asian Coast Development it didn’t want to wait for the casino resort project to get its then pending investment certificate from the Vietnam authorities.

Las Vegas-based Pinnacle Entertainment Inc, a publicly listed casino operator in the U.S., said in filing in May 2011 it had become a 26 percent equity partner in Asian Coast Development. But it said in later filings it had written down its entire US$109-million investment.

Colin Pine, general director of Ho Tram Project Co Ltd, a wholly-owned subsidiary of Asian Coast Development, said in an interview with GGRAsia in May that investors have so far spent approximately US$700 million on the Ho Tram resort.

He added that the management believes Ho Tram is well placed to be chosen for any pilot scheme the Vietnam government might launch allowing locals to gamble.

Vietnam’s government is reportedly considering a draft decree for the gaming industry. According to some reports it is likely to codify regulations for casino licensing and operations, and could possibly allow some local citizens to enter casinos under certain conditions.

Most of Macau’s casino operators are likely to generate positive free cash flow in the first quarter, given the robust recovery level of mass-market gross gaming revenue (GGR) in January, relative... END_OF_DOCUMENT_TOKEN_TO_BE_REPLACED