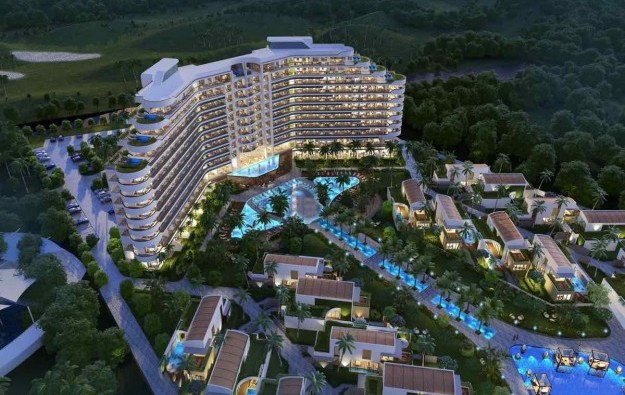 The promoter of a beachside Vietnam casino resort and real estate project called the Ho Tram Strip has announced a third phase of development.

The Ho Tram Project Co Ltd said in a Thursday release that the Kahuna Ho Tram Strip (pictured in an artist’s rendering) – described as a 244-unit development to the north of the casino venue’s hotel tower – would feature 164 one- and two-bedroom condominiums and eight penthouses in a 12-storey tower. It will also have 44 beachside villas, ranging in size from 218 square metres (715 sq feet) to 223 square metres.

According to the release, the third phase has been designed by the Ho Chi Minh City office of Korn Architects, and is likely to break ground in the fourth quarter this year.

Current construction includes a 559-room second tower for The Grand – dubbed The Beach Club – which the promoter says is designed further to expand the entertainment amenities at the resort and is likely to open in early 2018.

Thursday’s release said Ho Tram Project Co had so far “deployed and committed” more than US$1.1 billion in capital.

Some Macau casinos visited by GGRAsia on Thursday, actually had tables that were closed, notwithstanding strong consumer demand during Chinese New Year (CNY). The reasons for some tables being... END_OF_DOCUMENT_TOKEN_TO_BE_REPLACED