Vietnam’s Hoi An has three hotels in phase one: Suncity 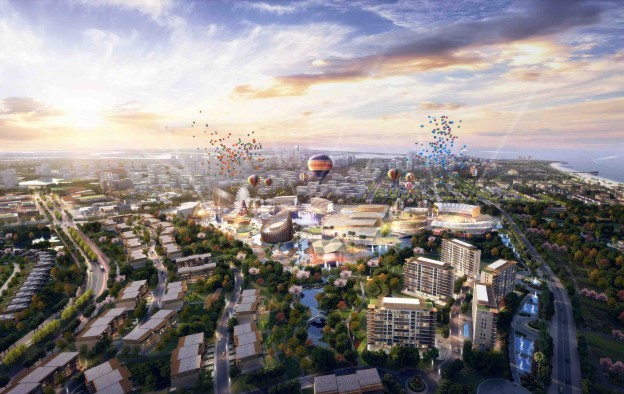 The first phase of a recently announced casino resort in Vietnam involving Macau junket investor Suncity Group will include three hotels, the firm said in a press release sent to GGRAsia.

“The Phase 1 integrated resort is due for completion in the first quarter of 2019, and will include approximately 1,000 lodging rooms [in] three hotels, residential villas and apartments, along with a championship golf course, food and beverage offerings, retail areas and a variety of further leisure and entertainment facilities,” the Suncity press release stated.

The release did not provide details on the gaming component of the scheme.

Hoi An South Integrated Resort (pictured in an artist’s rendering) will be located in Vietnam’s Quang Nam Province.

The firm added that, once completed, the project’s first phase would create “in excess of 2,000 new jobs”.

The project covers an area of 985 hectares, according to Suncity’s press release. The development “will occur in seven phases and total investment is estimated at circa US$4 billion on completion,” the release stated.

The casino resort is to be fully completed only by 2035, the firm said.

A ceremony to mark the start of construction for the Hoi An South Integrated Resort took place on April 25. According to Suncity’s press release, the event was attended by Vietnam’s Prime Minister Nguyen Xuan Phuc and other high-ranking Vietnamese officials.

Suncity is Macau’s largest VIP gaming consolidator measured by rolling chip volume, according to a number of investment analysts. The privately held firm operates VIP rooms in several casinos in Macau, as well as VIP clubs in casinos in the Philippines, South Korea and Australia, according to a corporate website.

“In the near future, Suncity Group will launch a variety of brand-new travel products and offerings, and aim[s] to further develop [its] business scope internationally in the field of leisure and tourism,” the firm’s release added.

According to brokerage Union Gaming Securities Asia Ltd, Vietnam’s foreigner-only rule regarding casino gaming is a less than optimal environment for a multibillion U.S. dollar casino investment. But the Hoi An South Integrated Resort “has a chance”, the financial institution said in a note last month.

“We don’t love the foreigners-only concept in Vietnam, although with the right set of circumstances we think the Hoi An project has potential based on the phase one cost,” Union Gaming analyst Grant Govertsen wrote at the time.

The cost of the first phase of the scheme is estimated at US$500 million, according to local media reports.