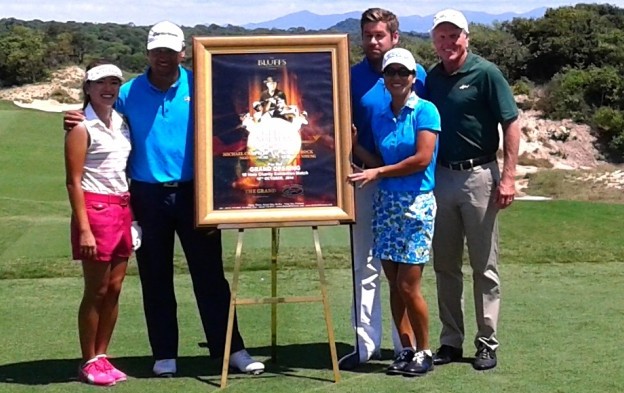 The Grand Ho Tram Strip casino resort in Vietnam on Saturday added another major attraction to its roster with the opening of The Bluffs, a new 18-hole golf course designed by one of modern professional golf’s most famous players, Greg Norman (pictured right).

Australian native Mr Norman, who has launched 87 courses around the world, had 90 wins in his professional career, including two victories at the Open Championship in the U.K. in 1986 and 1993.

He said at the opening ceremony: “…it’s a golf course that I’m extremely proud of, because it is a true links golf course. And as you walk down the fairways and you look at all the undulations, and the greens settings – most of those are exactly the way the original form [of the land] was. So it’s almost the least disturbance approach you can possibly do.”

Stephen Shoemaker, president and chief executive of Asian Coast Development (Canada) Ltd, the developer of the casino property, said at the ceremony, which was attended by Vietnamese officials: “We…wanted to design a course that was aimed at the customers and guests that would be coming to our resort, to offer a truly unique experience of golf not only in Asia but in the world.”

The exact terms of the deal between ACDL and Florida-based firm Greg Norman Golf Course Design Co as well as the golfer’s Great White Shark Enterprises Inc – the latter a play on his sporting nickname – have not been made public.

But The Grand’s management confirmed to GGRAsia that the total cost of the golf course scheme was approximately US$22 million.

As Mr Shoemaker indicated at the opening ceremony, the value of golf to the gaming industry could be to give wealthy businesspeople, many of whom play the sport already, an extra reason to come to a casino-hotel.

Macau casino operator Galaxy Entertainment Group Ltd has said in filings that it will invest RMB10 billion (US$1.6 billion) on “sports-related facilities and hotels” on Hengqin Island, a special economic zone of mainland China next door to Macau and a short distance by bridge from the firm’s Galaxy Macau casino property on Cotai.

At the Global Gaming Expo Asia 2013 conference held in Macau, Bob Drake, Galaxy Entertainment’s chief financial officer, said the firm was considering a “golf course” or “some other non-gaming amenity” for Hengqin.

But the land-intensive nature of golf courses has created a barrier for casino operators when it comes to developing them alongside casinos in highly built up areas such as Macau or even in less built up ones such as Las Vegas.

In Las Vegas, Wynn Resorts Ltd is the only gaming operator on the Las Vegas Strip to have a golf course attached to its casino resort.

In Vietnam neither foreign nationals nor foreign companies can buy the freehold on land. But ACDL was able to secure a 50-year lease on the 164-hectare (405-acre) beachside plot in Ba Ria-Vung Tau province, 120 kilometres (75 miles) southeast of Ho Chi Minh City. The plot includes the 50 hectares of land for the golf course. The current transfer time by road from Ho Chi Minh City’s international airport to Ho Tram is two hours and sometimes more.

In July it was announced that Chien Lee, founder of Nasdaq-listed Macau junket investor Iao Kun Group Holding Co Ltd, had become an investor in The Grand Ho Tram via his Florida-based entity NewCity Capital LLC, described by the China Economic Review as a Chinese private equity fund. Mr Lee later said he had put US$20 million into the project.

In July GGRAsia reported that several casino resorts in Asia are sponsoring golf events to increase their international brand awareness.

And in June, Macau casino operator Sands China Ltd – which owns and manages the Venetian Macao – announced a sponsorship agreement with veteran golfer Ernie Els. The deal included the South African wearing the Venetian Macao logo on his right collar, back of hat and back yolk during the U.S. Open – a tournament he won in 1994 and 1997.

During the opening weekend for The Bluffs, Mr Falcone announced that the second phase of the Ho Tram Strip would involve building a tower of condominium apartments that would be offered for sale. There would also be villas built next to Ho Tram Beach and alongside The Bluffs golf course that would also be marketed for sale, said Mr Falcone.

Disclosure: The reporter was a guest of The Grand Ho Tram in Vietnam.

Most of Macau’s casino operators are likely to generate positive free cash flow in the first quarter, given the robust recovery level of mass-market gross gaming revenue (GGR) in January, relative... END_OF_DOCUMENT_TOKEN_TO_BE_REPLACED