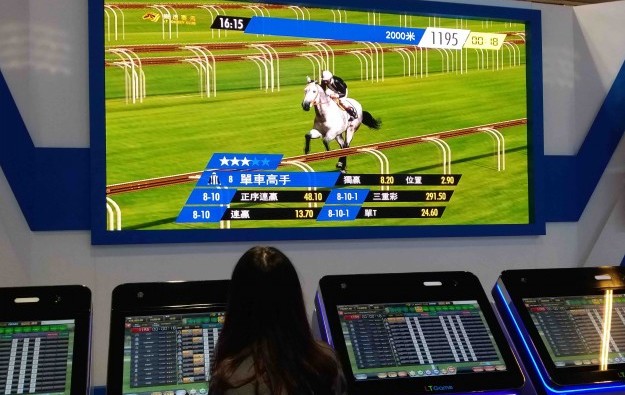 It follows news that LT Game had signed an exclusive deal with Inspired Gaming (UK) Ltd – a unit of the United Kingdom’s Inspired Gaming Group Ltd – to provide virtual sports content on ETG terminals in the Macau market. Paradise Entertainment said so in a press statement released on October 4. The parent firm noted at the time that “Virtual Horse Racing” (pictured) would be the first Inspired Gaming offer to be featured on LT Game’s machines, followed by “Rush Football” and “Rush ‘Tyson’ Boxing”.

In an emailed reply to GGRAsia, Betty Zhao, chief operating officer of LT Game, specified that LT Game and Inspired Gaming were working together on system integration for the launch of virtual sports products in Macau. She said her firm aimed to submit “in the second quarter 2017″ an application to the city’s casino regulator, the Gaming Inspection and Coordination Bureau – also known by its Portuguese acronym DICJ – for permission to launch such products.

“We were already in touch with [casino] operators and some of them have already shown strong interest in adopting the games. We are expecting to have an almost complete demo[nstration]  version by the first quarter of 2017,” Ms Zhao told us.

When asked about the number of ETG terminals that LT Game plans to launch offering Inspired Gaming’s virtual sports products in Macau, Ms Zhao replied: “We do not have any solid number at the moment, but suggest an ideal minimum setup ranging from 20 to 50 terminals. We are inclined to see [expect] the first pickup [to be] from Cotai casinos as [they have] more available space.”

Ms Zhao added in the email: “We have in total deployed currently about 4,500 live multi game (LMG) terminals in the Macau market, of which 1,400 LMG terminals are under our management: our idea is to have a standalone virtual sports betting stadium: but it really depends on availability of gaming floor space.”

The casino regulator additionally noted that it has not so far received any applications to run virtual sports betting in Macau.

Paulo Martins Chan, director of the gaming bureau, told GGRAsia recently on the sidelines of a public event that his department currently did not have a clear answer as to which existing local regulations – if any – might be used to establish oversight of virtual sports betting.

“Our law No.16/2001 [“Macau Gaming Law”] has listed the types of games regulated here [in Macau]. But as to virtual sports games, we have to conduct a cautious analysis of its details before categorising which type of game it is,” Mr Chan remarked.

“We also have to consider the fairness issue [of virtual sports betting] – what is the probability [game odds] and house advantage for this type of game. We need to have an accurate understanding of all these [things] before giving a concrete answer,” the head of the casino regulator added.

Pedro Cortés, a senior partner at Macau law office Rato, Ling, Lei and Cortés – and who acted as legal counsel for a unit of LT Game in some patent litigation with an entity called SHFL Entertainment (Asia) Ltd – said it may not be necessary to have fresh legislation or fresh regulations in order to regulate virtual sports games in Macau. Mr Cortés pointed out he was not representing either Paradise Entertainment or LT Game in relation to virtual sports in the Macau market.

He told us regarding the possible introduction to Macau of virtual sports: “It will mainly depend on how Macau authorities will define virtual sports betting among other forms of gaming, as well as on its [taking the] initiative to provide an appropriate framework.” He added it was still “highly arguable” whether virtual sports should or should not be considered a form of gambling distinct from other types of gambling.

“The company always seeks to enrich its games offering; via in-house development and partnering with unique gaming content providers. We are expecting this assignment not only to reinforce our strong presence in the Macau market but also to support our growth strategy on development of gaming technology,” the LT Game executive stated.

Grant Govertsen, an analyst at brokerage Union Gaming Securities Asia Ltd, told GGRAsia that while LT Game might be likely to enjoy some commercial success from launching products offering virtual sports, the possible arrival of such games in the Macau market would not necessarily shift in any meaningful way the market-wide focus of gross gaming revenue (GGR).

“I think the jury is still out on whether virtual sports products can generate meaningful revenue in Macau. Our initial reaction is that there is probably not a significant GGR opportunity, although it doesn’t take a significant GGR shift [product wise] to really move the needle for a company like LT Game,” Mr Govertsen said in an email.

“Macau is likely to monitor and pay close attention to the market evolution in other gaming jurisdictions, without disregarding the specific features of the local industry,” Mr Cortés said.

“That being said, I am of the opinion that the opening of the gaming market to different segments, including online and e-sports betting, is the best way forward to achieve a more attractive and diversified gaming offer in Macau,” he added.

The verdict – and eventual sentencing – in the case involving Alvin Chau Cheok Wa (pictured in a file photo) and other defendants linked to the now-defunct Macau casino junket Suncity Group Ltd... END_OF_DOCUMENT_TOKEN_TO_BE_REPLACED