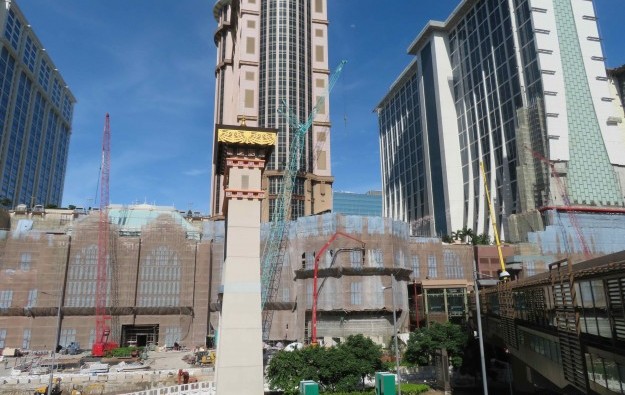 Covid-19 would not alter the phased timetable for opening the rejigged Sands Cotai Central casino complex (pictured) as a British-themed resort called the Londoner Macao, said Wilfred Wong Ying Wai, president of the site’s promoter Sands China Ltd in comments on the sidelines of a company event on Monday.

Part of the US$1.35-billion revamp should be completed and ready for launch as scheduled this year, he said, adding that what facilities were put on offer to the public at that point would depend on the volume of incoming visitors to Macau.

The project started last year, with the former Holiday Inn Macao Cotai Central beginning to be converted under the branding the “Londoner Hotel”.

“Investment-wise, there’s also no slowing. So the progress of the whole Londoner Macao is as what we’ve planned. And as we always mentioned before, it is going to be launched in phases throughout 2020 to 2021.”

In early June Sands China said in a filing to the Hong Kong Stock Exchange it was proposing to issue an aggregate of US$1.5-billion in senior unsecured notes to boost its liquidity during the Covid-19 crisis.

On Monday, Mr Wong was speaking to media on the sidelines of the company’s briefing for an upcoming event, “Sands Shopping Carnival”, due to be held from August 7 to 9 at Cotai Expo at the Venetian Macao casino resort across the road from the Londoner Macao. Sands China is a unit of United States-based casino group Las Vegas Sands Corp.

“The casino in the Londoner Macao should be ready around September – it should be completed by then. The hotel rooms should also be completed at that time in sync[hronisation]” with the casino, Mr Wong noted. “Londoner Macao will be an all-suite hotel, featuring about 600 suites,” he stated.

“What we hope is that the [launch of Londoner Macao] can be in sync” with any local government measures “to allow some visitors to come in” said the Sands China president. “If there is sufficient visitor flow, we can launch the project any time so that we can welcome guests with some new products, and new excitement,” Mr Wong added.

The Covid-19 pandemic has led to travel restrictions affecting the city and tourism worldwide. Macau’s Chief Executive, Ho Iat Seng told local media last week that he was watching to see whether there would be any “good news” in July regarding easing of regional intercity travel restrictions with Hong Kong and Guangdong province.

Sands China’s Mr Wong said he also hoped for good news soon regarding travel easing between Macau and its regional neighbours. The travel restrictions have already affected the official launch of the “grand suites” at Sands China’s Four Seasons Macao complex originally intended within the current quarter, said Mr Wong. The accommodation is aimed at “high-end clientele”, the executive noted.

“When it is impossible for the visitors to come here, it is useless to launch it,” said Mr Wong, referring to the new Four Seasons suites project.

“We are waiting for news on when the government can facilitate” eased travel “so that some of our guests can return,” the president said.

He also said the company had not “reduced” its establishment of local employees during the past “difficult” months. But some imported labour – accounting for “a few hundreds” out of Sands China’s circa 29,000-strong workforce – saw existing employment contracts expire and they were not renewed, he said.

The liquidity of casino group Las Vegas Sands Corp is “strong”, with over US$6.4 billion of consolidated cash and nearly US$3.5 billion of undrawn revolving credit facility capacity, said a... END_OF_DOCUMENT_TOKEN_TO_BE_REPLACED