Visitor arrivals to Macau down 4 pct in July 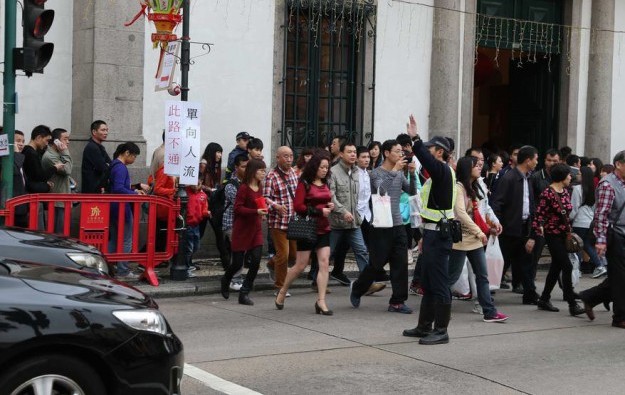 Visitor arrivals to Macau numbered 2.65 million in July, down by 3.8 percent year-on-year, data from the city’s Statistics and Census Service showed on Wednesday. The monthly tally of visitors to the city has declined year-on-year in five of the first seven months of 2015.

On Tuesday, separate data showed that total non-gaming spending by visitors to Macau continues falling this year as fewer tourists visit the city.

In July the number of visitors from mainland China decreased by 6.1 percent year-on-year to 1.76 million. It was however an improvement from the previous month, when the number of mainland tourists totalled 1.44 million, which was the lowest aggregate monthly figure of such visitors since March 2013, according to official data.

Macau’s visitor arrivals in the seven months to July 31 decreased by 3.5 percent from the prior-year period to 17.41 million. Mainland Chinese accounted for 66.2 percent of the aggregate number of visitors in the first seven months this year – or 11.54 million visitors, down by 4.5 percent year-on-year.

Investment analysts have said that headline visitor numbers are not directly correlated to overall gaming demand, as gross gaming revenue (GGR) in the Macau market has been typically skewed to high-end play. Official data show that Macau monthly casino GGR fell for 14 consecutive months up to July, judged year-on-year.

But a newly published study hinted that Macau residents are getting tired of tourist crowds. One of the authors of the study said that issues weighing down on residents include “traffic congestion and an inadequate public transportation system”.

Meanwhile, the China Daily newspaper reported this week that travel agencies in Guangdong province booking group trips to Macau and Hong Kong would be urged to use digital forms for government approval starting on September 1. By the end of this year all tour groups will adopt digital forms, the newspaper said, quoting the China National Tourism Administration.

Digital forms can help monitor travel groups and curb illegal travel operators, a representative of the tourism bureau was quoted saying. Guangdong province was chosen for the pilot project because it is “an important source of outbound tourists,” the person added.

The additional data on Macau visitors’ spending showed they paid MOP12.25 billion (US$1.53 billion), excluding gaming expenses, in the second quarter of 2015, down by 24.7 percent from a year earlier and 8.3 percent sequentially, the city’s statistics bureau said.

The biggest-spending visitors in the second quarter of 2015 were mainland Chinese people, with outlay on non-gaming products of MOP2,012 per head, down by 24.3 percent year-on-year. Shopping accounted for 52.8 percent of their total spending.

A separate set of official data showed that the aggregate value of retail sales in Macau fell to MOP14.26 billion in the second quarter of this year, 13 percent less than a year earlier. Sales of watches, clocks and jewellery – popular among mainland visitors – accounted for 21 percent of aggregate sales in the period but was down 29 percent from the prior-year period.

Macau’s efforts to generate a significant portion of its earnings from non-gaming activities faces significant challenges, highlighted a recent commentary by Fitch Ratings Inc. On Monday, the ratings agency said Macau needs to be realistic about the volume and type of non-gaming revenues its casino resorts can produce.

In 2014, fewer than 10 percent of Macau casino resorts’ gross revenues came from non-gaming activities, estimated Alex Bumazhny, a director at Fitch. In comparison, the Las Vegas Strip made 63 percent of its revenues from non-gaming in that period, said the ratings agency.

A note earlier this month by brokerage Sanford C. Bernstein Co LLC said mass-market gaming and non-gaming business was likely to be a more sustainable pursuit for Macau than chasing high stakes gamblers.

Most of Macau’s casino operators are likely to generate positive free cash flow in the first quarter, given the robust recovery level of mass-market gross gaming revenue (GGR) in January, relative... END_OF_DOCUMENT_TOKEN_TO_BE_REPLACED