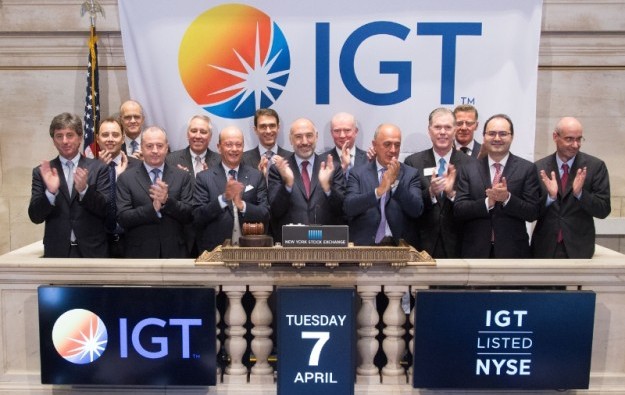 So says a note on Thursday from Wells Fargo Securities LLC. The brokerage adds that by those measures, the new entity – known as IGT Plc and listed on the New York Stock Exchange, as was the old IGT business – had more than US$6 billion in revenue in 2014 and US$2 billion in EBITDA.

Nonetheless the brokerage’s latest commentary on IGT’s stock also stated: “We maintain our market perform rating and remain on the sidelines given: (1) a soft gaming equipment market outlook, and (2) limited visibility into business trends and financials.”

Wells Fargo added: “We expect to have a better understanding of the business trends and financials by Q2 earnings, when audited financials and guidance are expected.”

The institution said the merger – which was closed on April 7 – meant IGT Plc was now “highly diversified in product mix and in geography”. Based on combined 2014 revenues, 45 percent came from gaming machines, 38 percent from lottery and the remaining 17 percent from sports betting, commercial services and interactive gaming, it stated.

“While we like the increased geographic and product diversity, Italy still represents 38 percent of IGT [Plc]’s revenues, which some investors may not find attractive,” wrote the Wells Fargo team of Cameron McKnight, Rich Cummings and Tiffany Lee, referring to the lottery business inherited from the Italy-based GTech entity.

What acquiring company GTech describes as the “turnaround” of the IGT operating unit – which is to remain based in Nevada – would take time, analysts were told at a meeting with management in March.

Wells Fargo stated however in its Thursday note that it was increasing the valuation range for IGT Plc shares, to between US$19 and US$22, from between US$18 and US$19 previously. The brokerage said that was based on 6.0x to 6.25x EBITDA estimates for the business for 2017, or 12 percent to 14 percent estimated free cash flow for 2017.

At the close of business on the New York Stock Exchange on Friday, IGT Plc’s shares were up 2.03 percent on the day, at US$19.57 per unit.

“Service revenues now comprise 82 percent of IGT’s business mix, which limits IGT’s exposure to the more volatile gaming and lottery product sales segments,” the analysts added, referring to recurring fees payable by customers of IGT technology and services, and latterly to the orders for new machines.

Jamie Odell, chief executive of Australia-based Aristocrat Leisure Ltd, had said in a conference session at Global Gaming Expo (G2E) 2014 in October in Las Vegas, that replacement orders for machines in the U.S. market were “50 percent lower” in 2013-14 than had been forecast by the industry three years earlier. Aristocrat has for many years been a market leader in Macau by share of units on the casino floor.

First quarter data for Macau released on Friday by the city’s regulator, the Gaming Inspection and Coordination Bureau, showed that slot machine numbers have stayed mostly unchanged at around 5,700 units since the beginning of 2014. Slot revenue slipped 26.3 percent year-on-year in the first quarter, to approximately MOP2.91 billion, from MOP3.94 billion in the year-prior period. That was in line with a downward trend also seen in the mass-market live table games segment, which has been linked in part with issues including mainland China’s slowing economy and its current anti-corruption campaign.

The slot machine industry also faces worldwide challenges in appealing to a new generation of younger players, according to several panel discussions held during G2E.

Mark Yoseloff, a former chief executive of gaming equipment maker Shuffle Master Inc and executive director of the Center for Gaming Innovation at the University of Nevada, Las Vegas, said that the velocity of betting and combinations of betting available on modern slot machines means the cost for players of using them for two hours has risen by as much as 1,000 percent in dollar-for-dollar terms in 20 years.

IGT’s social online casino brand DoubleDown Casino – purchased in early 2012 for US$500 million – is a strategic asset that could help address some of the issues linked to developing and marketing casino slots that appeal to new customers, said a Wells Fargo note in March.

A Macau court was offered evidence on Monday, including of recordings from police-wiretapped telephone conversation, that the prosecution says proves the direct involvement of Levo Chan Weng Lin... END_OF_DOCUMENT_TOKEN_TO_BE_REPLACED