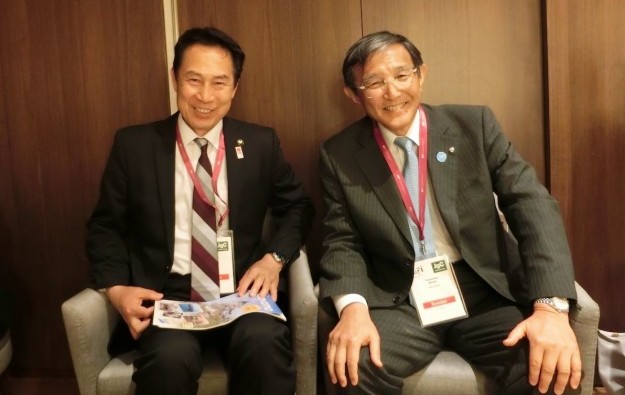 The administration from Wakayama prefecture – a place located on the southern coast of Honshu island in Japan – is determined to pursue a casino resort development, even in the face of intense competition from other Japanese prefectures.

So said Yoshinobu Nisaka (pictured right), Wakayama’s governor. He was speaking to GGRAsia on the sidelines of the Japan Gaming Congress last week, an event organised by Clarion Events Ltd.

“As nothing is finalised yet, we are going to continue our promotion activities,” Mr Nisaka told us, regarding a so-called integrated resort (IR).

“I also think that when it comes to such a new type of business, people should not be thinking of saying that there are ‘two licences offered’; or that an IR should be ‘looking like this or that’. Instead, the global business people should be coming and discussing [issues] with one another, to come up with different types of IR plan,” Mr Nisaka added.

Prior to the enactment of Japan’s IR Promotion Bill in December – the enabling legislation to allow casino business to be legal in Japan – discussions regarding location for resorts had centred on a limited number of licences for large-scale venues in major metropolitan areas and possibly a few smaller casino resorts in less densely populated regions. Tokyo, Yokohama and Osaka are the main major metropolitan areas mentioned by investment analysts as possible locations for integrated resorts.

Global Market Advisors LLC (GMA) – a U.S.-based consultant to the casino gaming, hotel and airline industries – said in its white paper on Japan’s nascent gaming industry that there will be an initial one to three IRs in the first round of request for proposals (RFP), with a second round beginning “after the initial IRs have opened and demonstrated their benefits to Japan”.

For the Wakayama administration, an artificial island called Marina City is now its only candidate site for hosting an IR, due to its existing marine leisure facilities and proximity to Kansai Airport. According to Mr Nisaka, his administration first invited interested investors 10 years ago, and found out that the Marina City site was the one they liked the most.

“There’s a big candidate nearby, which is Osaka. If Osaka were to be chosen as an IR site, we had a doubt that maybe Wakayama could not win any candidacy, even with Marina City,” said Mr Nisaka.

“And when I asked such questions, there were operators that told us that even if Osaka would have one IR, there could be another one in Wakayama as well, because the nature of the IR is different in these two places: one is city-oriented; another is resort-oriented,” the Wakayama prefecture governor said.

Casino operators have previously approached the Wakayama government on the issue of exploring opportunities to build an IR, Mr Nisaka noted. He declined to name them.

The Wakayama government is proposing the concept of foreigner-only casinos in its run-up to a bid, as a way of facing local community concerns regarding the perceived threat of gambling addiction.

“The local people’s greatest concerns are their families or close friends might get addicted to gambling. And if they see that they have no such chance, they won’t be objecting to such idea [hosting an IR],” said Mr Nisaka.

“I personally think the Singaporean way [of charging local citizens a levy upon entering casinos] would be sufficient as a restriction. But Japanese are perfectionist – even if there is a 1 percent of chance that a person can become addicted, then there would be opposition. And we would like to eliminate that opposition from the beginning,” he added.

Currently, the top three sources for the tourists visiting Wakayama are mainland China, Hong Kong and Taiwan, Mr Nisaka told GGRAsia. The other major feeder markets for the prefecture – well-known for its hot spring resorts – include South Korea, France, the United States and Australia.