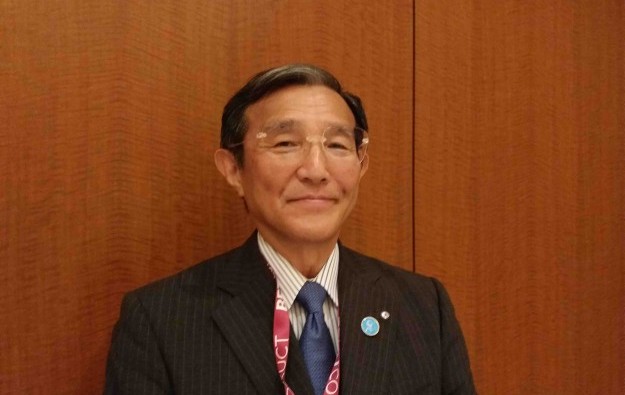 Wakayama prefecture has been given assurances by the Japanese central government that the area’s proximity to Osaka will not count against it in the contest for a Japanese casino licence.

So said Yoshinobu Nisaka (pictured) Wakayama’s governor, in an interview with GGRAsia on Friday on the sidelines of the Japan Gaming Congress, a conference in Tokyo organised by Clarion Events Ltd, to discuss the nascent Japanese casino sector.

“We asked the central government, and it stated, clearly, it would not say ‘no’ to Wakayama because of Osaka’s proximity,” Mr Nisaka told us.

Osaka, on the south central coast of the country’s main island, Honshu, is considered by many investment analysts covering the gaming industry as a front runner for one of three casino resort licences envisaged in the first phase of casino liberalisation in Japan. Wakayama city, the capital of Wakayama prefecture, is only 78 kilometres (48.5 miles) southwest of Osaka city, capital of Osaka prefecture. Both are in the populous Kansai region.

GGRAsia asked the Wakayama governor about the possibility the central government might choose the initial three casino locations – as envisaged under proposed legislation – for political reasons, such as garnering opposition party support or votes from local citizens, rather than for purely economic reasons. The governing coalition of the Liberal Democratic Party and Komeito has cited the use of private-sector money to stimulate regional economies via inbound tourism from overseas as a key reason for the casino liberalisation policy.

Governor Nisaka told us: “Japan is a fair country, led by law, so the administration has to follow the law all the time, in a fair manner. So we don’t have worries about it.”

The official did note however: “It would be my wish that the government not limit the number to an initial three [resorts]. I would like more integrated resorts to be opened [initially] because there are opportunities. That is my personal opinion. But the bill is already drafted, and it’s going to be passed soon, and we have to follow everything in the bill.”

During a conference panel session on Friday, Mr Nisaka had outlined a six-point plan for a Wakayama casino resort: a five-star hotel; meeting venues for international companies and academic conferences; a focus on Japan’s world-famous cuisine; an all-weather arena for international sports events and things such as e-Sports competitions; an interactive gaming centre using virtual reality technology; and the idea of “workation”, a combination of work and holiday in a single location.

He said a Wakayama resort was earmarked for a 40-hectare (98.8-acre) artificial island called Marina City, about half of which was available for development. It would likely have 2,500 hotel rooms, and meeting space covering 50,000 square metres (538,200 sq feet). The likely budget for the resort was JPY280 billion (US$2.6 billion) with a projected payback period of 8.7 years, according to the official’s presentation.

In comments to GGRAsia, Mr Nisaka explained why his authority – which hired Deloitte Tohmatsu Consulting LLC to work on economic modelling for the resort initiative – thought it would be profitable.

“We exchange information very often with the central government, and we clearly established they will choose three locations based on: whether it [the proposed integrated resort] is well crafted; whether it’s likely to be profitable or not; and how much impact it has on the Japanese economy. And we are very confident that Wakayama’s integrated resort will be highly profitable, and will have a large impact on the Japanese economy. So if this selection process is done in a fair manner, as the central government says, we can be selected.”

He stated: “First, the Wakayama integrated resort would be very close to Kansai International Airport, one of the largest airports in Japan, and the number of international visitors arriving at the airport has been increasing.”

Data released in January by the air hub’s operator said that the 2017 tally of international passengers at Kansai International Airport was 14.3 million, compared to just under 12.3 million in 2016, a year-on-year increase of 17.6 percent.

“If we can establish an integrated resort in Wakayama prefecture we could attract many tourists from abroad,” said Mr Nisaka.

The governor further stated: “The second reason is that the candidate site, Marina City, is an artificial island already constructed. That means the company [investor] concerned does not need to make the initial investment for infrastructure, because it’s ready.”

He added: “The third reason is that Marina City is already a hub for events and sports, so… it’s a very convenient location.”

At the 2017 edition of the Japan Gaming Congress, Wakayama made national and international headlines by indicating it would not want its facility open to local players. It has since reviewed its position on that point.

Mr Nisaka told GGRAsia: “Last year the terms of the [Integrated Resorts Implementation] Bill were not set yet, so we were not sure what kind of regulations would be imposed on Japanese people visiting integrated resorts. But we know that Japanese citizens are highly sensitive to the idea of negative effects from casino gambling…”

He added: “So we said we would not allow Japanese citizens to enter casinos until the Japanese government set enough regulations, and until we could be sure there would be no concerns about gambling addiction.”

He further noted: “The regulation the government is planning to impose is very strict…”

The implementation bill as endorsed by the central government in late April sets a JPY6,000 casino entry fee for locals for 24-hour access, and limits casino visits by Japanese to three times a week and 10 times per month in aggregate.

Mr Nisaka added: “Wakayama prefecture has by itself proposed additional devices by which the operator can prevent negative effects on people.”

In materials handed out at the conference, Wakayama said the additional local measures to tackle problem gambling included: prevention of overspending by issuing of a local “integrated resort card” which would set the maximum amount to be spent; what it termed “preventive education”, teaching schoolchildren as young as those at elementary level about the “risks of gambling”; implementation of a local dress code, banning customers from entering the casino floor in sandals and shorts – as a way of preventing impulse gambling; and use of “gambling addiction specialists” who would talk to problem gamblers, if necessary “prompting them to leave” the casino.

Package tours from mainland China to Macau will resume from Monday, February 6, confirmed Macau’s Secretary for Economy and Finance, Lei Wai Nong, in a Friday press conference. The return of... END_OF_DOCUMENT_TOKEN_TO_BE_REPLACED