‘We don’t rest on our laurels’: Aristocrat’s new Asia boss 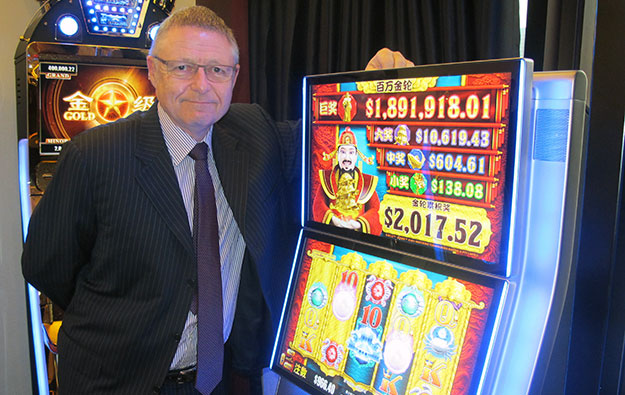 The year 2014 was a challenging one for Aristocrat Leisure Ltd in Asia Pacific. The Australian slot maker saw the Macau gaming regulator ordering casinos to turn off all the company’s linked progressive slot machines featuring its ‘Fa Fa Fa’ and ‘Yellow Dragon’ themes – among the most popular slot products in Macau – following a player complaint.

Vincent Kelly (pictured), the company’s new managing director for Asia Pacific, says Aristocrat will keep investing in new products to ensure the issue does not harm its market leadership.

“We don’t rest on our laurels,” he told GGRAsia in an interview.

“We invest more in research and development every year than we actually make in profit… I am confident that the investment that we have made in our people, in our creativity, in our technology; will continue to produce great games for our customers across Asia Pacific.”

Mr Kelly added: “I am very confident and that is based not only on the size of that investment but the results achieved over the last few years.”

Mr Kelly preferred to downplay the Macau regulatory issue, which has seen the affected products switched off for months – while remaining on local casino floors. “There has been a dispute from a particular player and we are waiting to see how that resolves itself,” he said.

Instead, the new executive is focused on pushing forward ‘Good Fortune’, the firm’s latest progressive link product for the Asian market, delivering five levels of jackpots. “We have just been introducing it into the market and it seems to be going quite well for our customers,” he said.

Last year, slot makers saw the announcement of technical standard updates both in Macau and Singapore. Some industry insiders have privately complained about the short notice associated with the Macau announcement, saying it negatively affected the release schedule of new products.

But Mr Kelly commented: “Regulation has to continue to be advanced… We want markets to be well regulated. These things are here to protect and help all the stakeholders. It is our responsibility to work with that.”

Mr Kelly’s October appointment as managing director for Asia Pacific was part of a wider move by Aristocrat. The slot maker promoted Asia Pacific to a standalone core business segment, meaning it is no longer included in the ‘Rest of the World’ division.

The Asia Pacific region excludes Australia and New Zealand, which is a standalone segment. Japan is also not included – instead, the Japanese market it is managed from Australia.

“I already have had the opportunity to travel around the Asia Pacific region – obviously Macau, where we are based, but also Singapore, Manila, Kuala Lumpur,” said Mr Kelly.

“There are three things that have very pleasantly surprised me: the amount of growth there is in our industry across so many markets; everything that is happening in the Philippines; and the high quality of the development in Macau.”

Mr Kelly expects Aristocrat to post healthy growth in Asia Pacific, as there are several new properties and expansions scheduled to open this year. He says product replacement is also becoming part of the business, especially in Macau, as casinos “are keen on making sure that they have the right machines on their floors”.

Aristocrat reported an unaudited after-tax loss of AUD16.4 million (US$13.2 million) in the 12 months to September 30. In the equivalent period in the previous year, it made an after-tax profit of AUD107.2 million.

Aristocrat said it had continued to maintain its top spot in market share in Asia during the period, despite “some regulatory churn in Macau” adding that there had been few new venues opening in the region during that financial year.

Mr Kelly joined Aristocrat in January 2014 following a sales and management career in the liquor and hospitality industries in the United Kingdom, Hong Kong and Macau, Australia and New Zealand. He said he relishes his new role despite having no prior experience in gaming.

“[Liquor and gaming] are very similar because they both are in adult entertainment,” Mr Kelly argued.

“They are both regulated, both taxed and both have their social responsibilities that we have to be conscious of. And the final customers – or players – are the same. So, in fact, they are probably much more closely aligned than you would first think.”

“I am not building the business from scratch. I am lucky enough to inherit great products, great people and great customers, and to have the opportunity to work with them to develop our business even further.”

Aristocrat’s priority now is to expand the breadth of its portfolio across all segments, Mr Kelly pointed out. The firm is also deploying the first units of its new Helix cabinet in Asia Pacific, after successful launches in North America and Australia.

Future products may include contributions from U.S.-based slot maker Video Gaming Technologies Inc (VGT), which was acquired by Aristocrat last October in a deal worth US$1.28 billion.

“The immediate impact from the VGT acquisition will be in the U.S. in terms of making us a more important player there,” Mr Kelly said.

“But we make our money primarily out of our intellectual property and VGT has a lot of that. I am sure that there will be some things that we can learn from our colleagues at VGT that will, in some way, help us in the Asia Pacific market.”

The VGT deal was one of several acquisitions announced during 2014 in the gaming supplier industry, part of a wide consolidation trend that swept the sector last year. At least two ‘giants’ were created, with the acquisition of Bally Technologies Inc by Scientific Games Corp, and the merger between GTech SpA and International Game Technology (IGT).

“It is important to have strong competition,” Mr Kelly said. “What makes you a better player are better opponents.”

He added: “Having a lot of weak competitors, in the longer term, is not a healthy thing for any industry.”

Casino equipment supplier Sega Sammy Creation Inc said in a Friday release it was debuting its Genesis Crest 43J cabinet in Asia. The product will be available at an in-person trade show, G2E Asia:... END_OF_DOCUMENT_TOKEN_TO_BE_REPLACED