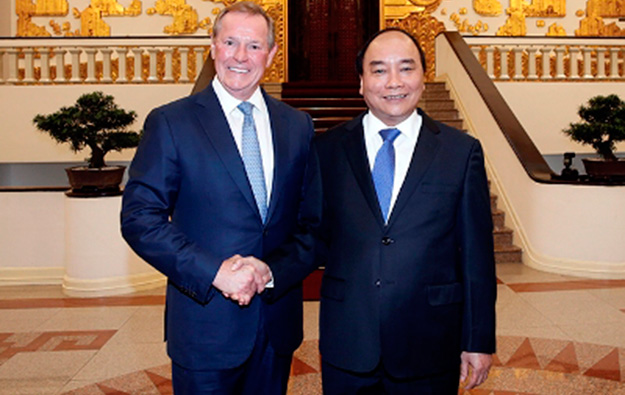 A group of U.S.-based investors – including Bill Weidner (pictured left), a former president of casino operator Las Vegas Sands Corp, and architecture practice Steelman Partners LLP – has been linked in a Vietnam media report with a US$4-billion real estate project in that country.

The report by online news portal Vietnamnet didn’t mention a casino in relation to the project. But the figure of US$4 billion is typically the amount regarded by the Vietnamese authorities as the headline capital investment expected for schemes linked to casino gaming. Only foreigners are allowed to use Vietnam’s existing casinos.

The place targeted for the new real estate investment project is referred to as a new urban area called Thu Thiem, in District 2, in Ho Chi Minh City – the largest city in the south of the country, and formerly known as Saigon.

The U.S. investors also met with the Vietnamese Prime Minister Nguyen Xuan Phu (pictured right) during their visit to the country, according to media reports.

Mr Weidner’s firm Global Gaming Asset Management LLC was the first manager of Bloomberry Resorts Corp’s Solaire Resort and Casino in Manila in the Philippines when it opened in March 2013. Mr Weidner also proposed to develop a casino resort on Taiwan’s outlying island of Matsu.

Steelman Partners is led by Paul Steelman, and was involved in the design of the Ho Tram Strip casino resort in Vietnam as well as many other casino resorts around the world.

The local partner for Thu Thiem is said to be the Imex Pan Pacific Group, known as IPP, a conglomerate that has investments in shopping malls.

According to Vietnamnet, the group of backers plans to develop the new project on 11 hectares (27 acres), in fewer than four years, with a total investment of more than US$4 billion. The highlight would be an office tower, added the report.

The long-awaited new outdoor theme park at Resorts World Genting, Malaysia’s only casino resort, is impressive, but likely to be “loss-generating due to heavy depreciation”, says a Thursday... END_OF_DOCUMENT_TOKEN_TO_BE_REPLACED