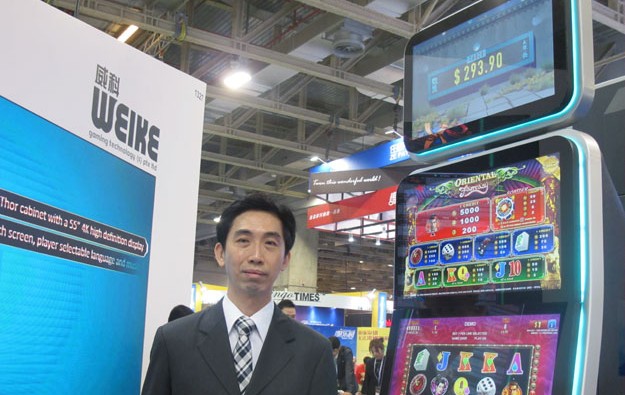 “We expect to gain market share in Macau,” Mr Tay said, referring to the new casino openings planned for 2016 and 2017 in the city’s Cotai district. “That’s our target, but the new products we have should perform well in other markets, like Singapore and the Philippines,” Mr Tay told GGRAsia.

The company is showcasing its new Multi-player Electronic Table Game series, the METG GEN 3. The METG series currently has strong popularity with players in Southeast Asia, especially in Vietnam, according to Weike.

“The GEN 3 has a new cabinet with a slimmer design. It’s more advanced as it has a more powerful motherboard and a high-resolution monitor,” said Mr Tay. The product was developed with a modular design, which makes it easier to customise installations. It offers operators the option to configure the product either as a fully automated or partially automated table game, the latter option with the assistance of a live dealer.

The GEN 3 keeps some of the key features of the METG series, like Weike’s patented card peeping technology. “The design still looks and feels like a live gaming table,” Mr Tay said, adding that the company has received “very good feedback” from customers regarding this new product. The next step, he said, would be to increase the number of seats to accommodate a total of seven players, compared to the current five.

Weike is also boosting the number of games for the Infinity-X slot cabinet. Mr Tay said the firm is aiming to diversify the themes it offers. “We are trying to change a bit the direction, and instead of just being very strong in Chinese themes, we start to develop some Western themes,” said Weike’s executive director.

The company has already introduced some of these new titles at clubs in Singapore and Malaysia. Casino regulators in Macau, Singapore and the Philippines have meanwhile approved a few of the new games, which should be launched in these markets soon.

At G2E Asia, Weike is also showcasing the prototype for a new multi-game cabinet it plans to launch in the fourth quarter of 2016. The cabinet features the theme of Chinese classic literary work “Journey to the West”.

Mr Tay said the company had already completed a round of trials and the cabinet was currently undergoing the necessary tests with international gaming testing laboratories. The next step would be to gain the approvals from several jurisdictions in Asia.

“We really want to launch this cabinet this year… I believe this will be a great milestone for Weike. It comes with a very powerful motherboard, three high-resolution screens and a very strong theme,” said Mr Tay.

Casino equipment supplier Sega Sammy Creation Inc said in a Friday release it was debuting its Genesis Crest 43J cabinet in Asia. The product will be available at an in-person trade show, G2E Asia:... END_OF_DOCUMENT_TOKEN_TO_BE_REPLACED