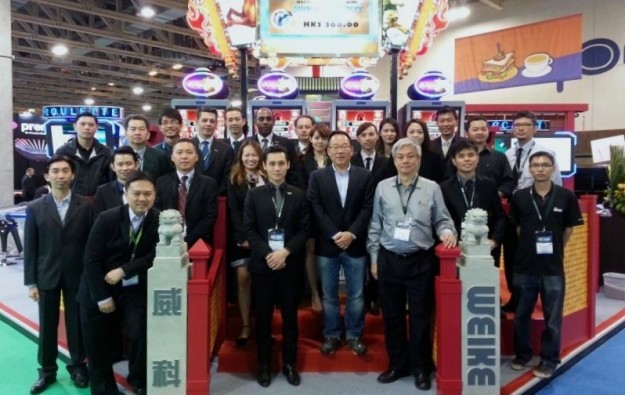 Singapore-based electronic casino games and systems specialist Weike Gaming Technology (S) Pte Ltd was founded in 1998, on the cusp of the biggest expansion in casino licensing that Asia has ever seen.

One of the milestones in the company’s own history was April 20, 2010. That was the day Weike got a particular licence of its own – one not easily acquired by Asian casino suppliers – namely a gaming machine manufacturer’s licence from Singapore’s Casino Regulatory Authority (CRA).

While no manufacturer can sell products unless the players and casino operators like them, having CRA licensing does help with entry into other markets, says Ray Poh, chief operating officer of the company (pictured fifth from left with the Weike team).

“People look at it as something based on very robust legislation. People give it a certain respect.

“We went through a very stringent probity check – all the senior management and the company itself – before being licensed by the CRA. That’s useful for us because it offers a chance to enter pretty much any market that is regulated. Singapore’s regulatory model is something that tends to be looked upon in other parts of the world as good practice,” explained Mr Poh.

In Japan, lawmakers and supporters of proposed legislation to legalise casino resorts in that country frequently refer to “the Singapore model” – even down to a possible entry levy for players – when discussing how such an industry might be regulated.

“Japan is a market we would definitely be interested in, but of course there are no regulations yet,” stated Mr Poh.

Asian markets that are already active include Macau and the Philippines, where the firm also has licences.

“We look at Singapore, Macau and the Philippines as the major markets for Weike,” the COO told us.

“Right now we concentrate and apply most of our energy to the Asian markets. Most of the other machine suppliers are based outside Asia – in the U.S. or Australia – so they tend to concentrate on those markets and regard Asian markets as secondary. To us, Asia as a whole is our primary market. We do games purely for this region at this moment. And all our time and energy is spent studying the habits and preferences of players in this region,” explained Mr Poh.

The discipline of fast product development and speed to market was honed via Weike Gaming’s heritage of serving the Singapore slot club market. These club establishments pre-date their more glamorous cousins, the integrated resorts of Resorts World Sentosa and Marina Bay Sands, both of which opened in early 2010.

Although small in scale, the Singapore clubs have a demanding and discerning clientele that crave innovation and know a good game when they play one, Mr Poh pointed out.

“This is a market where the players love new products. We do a roll out of new games every one to two months for the Singapore clubs market,” he explained. “And we’ve had really good feedback from the club operators and from the players. That said, the club market is very different from the casino market,” he added. 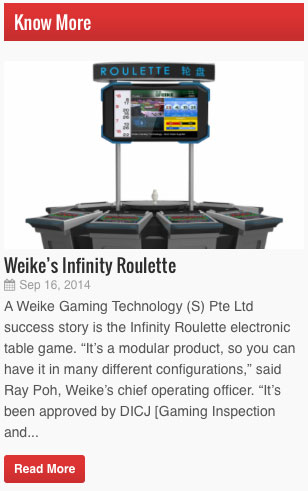 The experience of serving the clubs market – including learning how to tailor product to a small but loyal audience – has helped the company develop another niche – that of a supplier of already market-proven games customised to suit individual casino operators. The customisation can vary from the packaging and theming of a cabinet down even to the mathematics of the game.

“We have customised a game for Marina Bay Sands in Singapore, and we have worked with Resorts World Sentosa to customise games for that property. We are also working on getting a transfer of customised gaming over to Macau – to get it approved by DICJ [the local regulator].”

Weike Gaming’s experience of selling suites of products – including slot management systems – to slot clubs and mid-sized casinos – has also helped when it comes to understanding how big casinos want their slot and electronic table games to integrate with the rest of their gaming floor, said Mr Poh.

“We offer an holistic range of products – from systems, to slot machines to electronic table games. We can set up an operation ranging from a small-scale club to mid-sized club or casino. So when a large casino operator approaches us – even if they only want one element of our offer – we understand how it is likely to be integrated in relation to their whole floor.”

The firm has had success in Asian casino markets and the Singapore club markets with its Infinity X standalone slot cabinet. Popular games on the platform in Macau and Singapore include ‘Qin Shi Huang’, named and themed based on China’s first emperor. Another popular slot title is ‘The Landlord’ or ‘Dou Di Zhu’ as it is known in pinyin on some of the company’s slot cabinets. The product is themed on a popular Chinese card game that translates as ‘Beat the landlord’.

Weike will also be launching a linked progressive slot game in Asia “soon”, said Mr Poh. Linked progressives are among the most popular slot games with players in Asian markets because of their jackpots that can accumulate to very large amounts during the cycle of the game.

Among Weike’s other regional target markets, the firm has had significant success in Vietnam.

“For Vietnam, we do have the lion’s share – hovering between 50 percent-plus and 70 percent – of the electronic table games market. Our baccarat table works very well in that market. It has a look and feel very similar to a traditional live table – and we have an attendant controlling the pace of the game,” Mr Poh explained.

“In terms of the prevalence of electronic gaming machines in Asia, I think that will continue to grow. And there are markets like Laos and Myanmar that are opening up.

“But whether Asia will be as big for electronic gaming as the United States or Australia – I don’t see it dominating to that extent. I think live tables will still be important.

“One thing is for sure. Asia is our primary market. This is what we are concentrating on. And we will not give up until we are a bigger player in the industry in this region,” Mr Poh told GGRAsia.