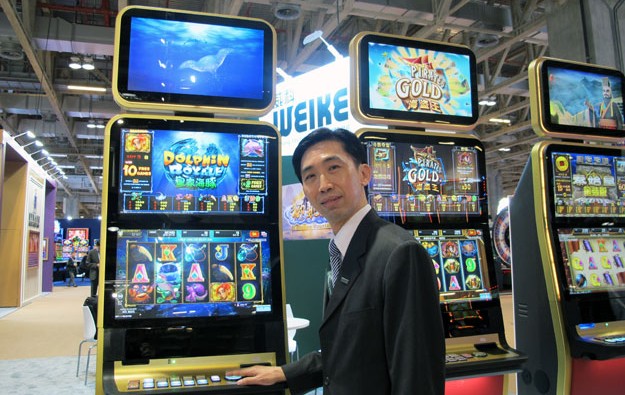 “Our next focus will be our ETG products. We are currently developing a new ETG, which we plan to launch next year,” Daven Tay (pictured), Weike’s executive director, told GGRAsia during the MGS Entertainment Show 2017, a three-day gaming trade show held from November 14 to 16 in Macau.

The company has already shipped some of its multi-player electronic table game (METG) products to gaming venues in Vietnam.

“We had strong demand for our METG product from venues in Vietnam, having shipped some tables to clubs in Ha Long Bay and Ho Chi Minh City,” said Mr Tay.

Weike’s METG product offers operators the choice to configure the product either as a fully automated or partially automated table game. It can feature games ranging from baccarat to black jack.

Mr Tay said the company would now be developing a “purely electronic ETG”, called METG Emperor, likely to be unveiled around May 2018, during the Global Gaming Expo (G2E) Asia, another annual casino industry trade show and conference held in Macau.

The executive additionally said that one of Weike’s associate companies would be launching a gaming management system for clubs, seeking to work with venues to implement a more efficient floor management solution. “It will be a great year for Weike in terms of new offerings,” said Mr Tay.

Singapore-based Weike has also been busy this year working to promote its new Emperor cabinet with the firm’s innovative feature “Free Play” points. The cabinet has been performing “very well” in Malaysia and in the Singaporean licensed slot clubs, as well as in one casino in the Philippines capital Manila, the firm says.

Macau’s casino regulator, the Gaming Inspection and Coordination Bureau, has recently approved the new cabinet and the company is now focusing on selling the product in the city’s gaming market.

“We have already launched [the Emperor cabinet] in the Philippines and it is doing very well. We had a very good start and we have more people interested in buying our new product,” said Mr Tay.

He added: “In Macau, we are negotiating with all the casino operators. We just got the approvals a couple of weeks ago, and we are starting to push for its installation in this market.”

Free Play points is Weike’s special solution to the puzzle of how to reward players in the intervals between jackpots and minor prizes – other than via offering free games during features. The players are awarded Free Play points at random when they play the games, and use the points at any time afterwards.

“The Free Play points was also a success in the Philippines, as people got used to it very quickly,” said Mr Tay. The executive said the company had already deployed about 100 units of the new cabinet in several markets across Asia.

“We will be installing the cabinet in clubs in Vietnam next week and we should do so in venues in Cambodia by January,” said the Weike executive. The company will also be deploying the new product in a club in East Timor in December, he added.

Weike is additionally supplying machines to a casino in Kenya as part of the company’s strategy to increase its international footprint.