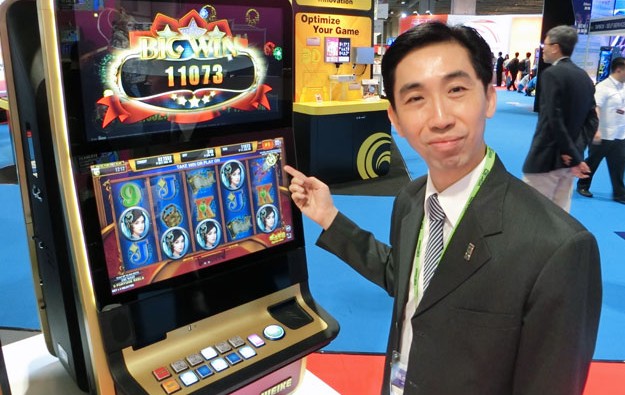 Electronic casino game specialist Weike Gaming Technology (S) Pte Ltd will launch a new product – the Emperor cabinet with the innovative feature “Free Play” points – in Macau in the third quarter of 2017. It follows the success of the new idea in Malaysia and in the Singaporean licensed slot clubs.

The news was revealed by Daven Tay (pictured), executive director of the company, during the Global Gaming Expo (G2E) Asia 2017, a three-day gaming trade show held from May 16 to 18 in Macau.

“We had a successful launch [of the new product] in Malaysia and Singapore’s clubs last month; the players just love this Free Play point feature,” he said. “Within one or two days, they were already familiar with the feature.”

“Free Play” points is a patented innovation developed by Weike to offer players what it says is a better gaming experience. The players are awarded Free Play points at random when they play the games, and use the points at any time afterwards.

Mr Tay said that compared with a standard in-play award such as a free game, the advantage of the new feature is that the players can accumulate the points and use them when they want during that session. By contrast, any wins awarded during free games in standard-play games would be credited back to the players’ credit balance. “We glue the players on the seats [with this new feature] because they enjoy the games more,” he noted.

Following the success in Malaysia and the Singaporean clubs, the company will launch the Emperor cabinet in the Philippines next month. Mr Tay declined to identify the casino, only saying it was one of the top venues in the Asian country.

“We will launch the product in Macau in the third quarter, followed by Vietnam and [South] Korea,” he said. “We have a lot of orders coming in and we’re busy in the production – it’s my happy problem.”

The Emperor cabinet will also be introduced to the casinos in Singapore in the first quarter of next year, pending regulatory approval.

Apart from enriching the experiences of players, the Emperor cabinet could also save the operators effort in doing promotion, Mr Tay said. “A lot of casinos are basically doing promotion by giving out vouchers and this product with Free Play point feature allows [the operators] to do it in an easier way,” he said.

In addition to the core Asian markets, Weike has also recently supplied machines to a casino in Kenya as part of the company’s strategy to increase its international footprint.

“Weike is small manufacturer compared with other manufacturers, so we cannot only be followers,” he said. “We must be innovative and creative to come up something [new] for players to enjoy.”

A Macau court was told on Wednesday that Asian American Entertainment Corp Ltd (AAEC), led by Taiwan businessman Marshall Hao Shi-sheng, was to blame for its failed tie-up with United States-based... END_OF_DOCUMENT_TOKEN_TO_BE_REPLACED