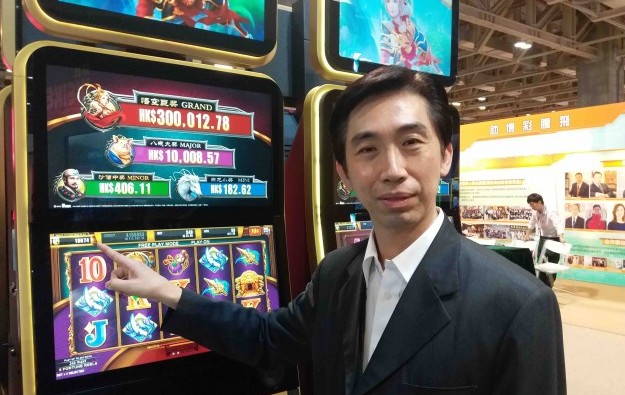 Electronic casino games specialist Weike Gaming Technology (S) Pte Ltd has taken inspiration from its sales of slot machines in Singapore’s clubs market, in order to enhance the experience for players of its new-generation products.

“Free Play” points is Singapore-based Weike’s special solution to the puzzle of how to reward players in the intervals between jackpots and minor prizes – other than via offering free games during features.

“Free Play points is a random award by the game itself,” Daven Tay (pictured), Weike’s executive director and a co-founder of the firm, told GGRAsia.

Unlike a standard in-play award such as a free game, Free Play points can be saved up and played at any time in that individual play session, he said.

There are currently three Weike games with Free Play points capability: “Queen-dom”; “The Grand Wedding”; and “Camelion Mountain” – all on Weike’s Emperor cabinet, as part of the Super Monkey King series. The series of games is based on stories associated with the Monkey King, one of the most famous characters of Chinese mythology and literature.

“The most important thing for this entire series of games is the Free Play points,” said Mr Tay.

“We embedded loyalty points – something special in terms of promotion credits – in the machine itself. You can then use those points to play and to enhance the player experience.”

The company explained that the Free Play points function is enabled by the casino operator during initial setup of the slot machine. Once enabled on the device, players will be awarded Free Play points at random as they play the game.

The player can choose to use the Free Play points at any time to play the game. Any wins awarded during Free Play points-enabled activity are eventually credited back to the player’s credit balance.

Weike said the Free Play points innovation keeps players on a machine longer and is beneficial for the operator.

Mr Tay noted that the industry approach previously to the issue of player rewards and engagement between wins and features has commonly been to use a casino management system to gather information on player activity – in order to reward the player with things such as vouchers for food and drink, or free play.

Weike – which says it has a patent pending on its Free Play points innovation – explains that this way of giving back to the players can be stored in what is effectively an on-screen e-wallet, for the play session. The points cannot be deferred to a later play session, nor can they be cashed out.

“When you use the Free Play points and you win [a cash award], then you can cash out,” explained Mr Tay.

“When there is a [Free Play point] win, a symbol is displayed and you are awarded these Free Play points. This is to enhance the player experience and to prolong the player play time; on top of the normal RTP [return to player] we give an extra something for the player,” Mr Tay explained.

Part of the inspiration for Free Player points was the relatively modest return-to-player percentage – the proportion of all money bet that must be returned to players in the form of prizes over time – commercially necessary on the slot machines installed in Singapore’s licensed slot clubs.

Weike’s approach to business – which it characterises as timely product development and speed to market – was honed via Weike’s heritage of serving the Singapore slot club market. These establishments predate their more glamorous cousins, the casino resorts of Resorts World Sentosa and Marina Bay Sands, both of which opened in early 2010.

“Part of the inspiration for Free Play points was the tax rate in the Singapore clubs,” Mr Tay explained.

“The tax structure for club slot machines is different from the Singapore casinos. For clubs it is 9.5 percent of turnover, whereas in the casinos it is 15 percent of the gross profit – i.e., total in, minus total out,” added the executive director.

“Casino RTP is quite high: for example, in Singapore the CRA [Casino Regulatory Authority] stipulates it should be a minimum 90 percent. But in the clubs it’s about 83 percent,” said Mr Tay.

“We developed Free Play points as a way of prolonging and enhancing the player experience,” he explained.

“We are in the approvals stage now for the regulated markets. And we are very actively promoting this product to the industry,” said Mr Tay.

Macau’s casino gross gaming revenue (GGR) for the first five days of February is estimated at MOP1.9 billion (US$235.1 million) – or MOP380 million per day – a level that suggests a “45... END_OF_DOCUMENT_TOKEN_TO_BE_REPLACED