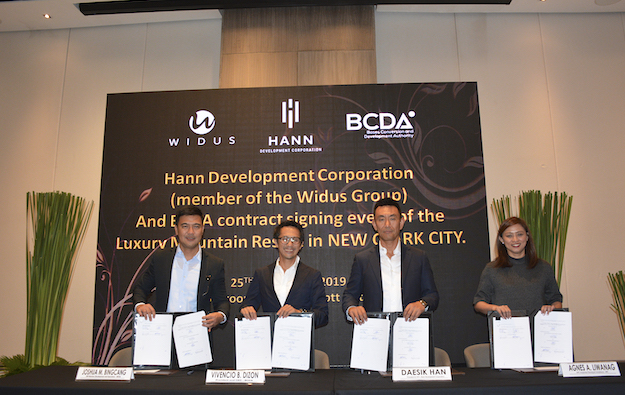 The Widus Group is considering the possibility of adding casino facilities to its Hann Lux mountain resort project in New Clark City, in the Philippines. So said a company spokesperson in comments to GGRAsia.

“Mr Han is still considering the possibilities of having a casino at the New Clark City property,” the Widus Group representative told GGRAsia. That was a reference to group head Daesik Han.

The Widus Group is the owner and developer of the Widus Hotel and Casino at Clark Freeport Zone – a neighbouring area of New Clark City – in the Philippines. That property was formally granted its “regular” gaming licence in July.

The Widus Group announced late last month that it had signed a lease agreement with the Bases Conversion Development Authority – a body owned and controlled by the Philippine government – for the development of the Hann Lux resort (signing ceremony pictured). Under the agreement, the Widus Group will lease 450 hectares (1,112 acres) of land within New Clark City with an investment commitment of PHP12 billion (US$238 million), the firm said at the time.

The first phase of the project involves an investment of PHP5 billion and is expected to be completed in five years. It is to include two hotels – respectively under the Angsana and Banyan Tree brands –, a golf course, and a clubhouse.

New Clark City is located 100 kilometers (62 miles) north of Metro Manila. It is being positioned as a new development area, to decongest the capital Manila.

Widus Group said in May that it had secured a PHP7-billion syndicated loan to finance the expansion of the Widus Hotel and Casino complex property, including a new hotel tower. According to the company, the fourth hotel tower consists of 380 rooms in a 19-storey structure, featuring also additional restaurants and shops.

A number of minority political parties in Thailand has submitted a draft amendment to the country’s Gambling Act, with the aim of legalising land-based casinos and online gambling, reported on... END_OF_DOCUMENT_TOKEN_TO_BE_REPLACED