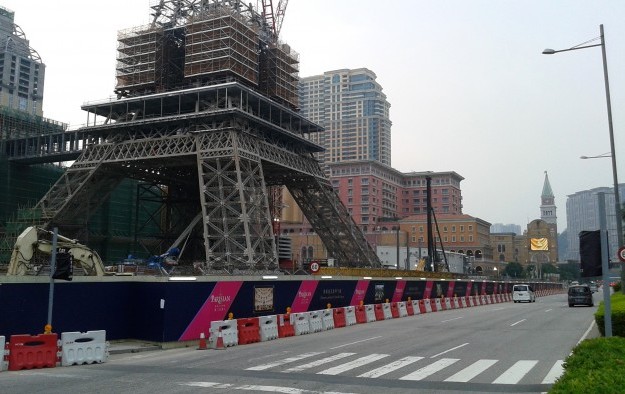 Mr Wong will succeed Rob Goldstein, who has been serving as Sands China’s interim president since earlier this year. Mr Goldstein became the president and COO of parent company Las Vegas Sands earlier this year, replacing Michael Leven, who retired.

Mr Wong has served in a variety of senior business roles, including most recently as chairman and chief executive of Hong Kong-listed Hsin Chong Construction Group Ltd. A unit of that group – Hsin Chong Engineering (Macau) Ltd – is a key contractor on Sands China’s US$2.7-billion Parisian Macao project (pictured).

The Hsin Chong Construction Group has been involved in the construction of every Macau property built by Las Vegas Sands and its units, according to Hsin Chong’s corporate website.

According to Sands China’s release, Mr Wong also served in various different levels of the Hong Kong government. He was also elected a member of the National People’s Congress of the People’s Republic of China for 15 years from 1997 to 2012.

“Wilfred has a unique combination of private and public sector experience we think will be invaluable to the company at this point in our history,” Sheldon Adelson, chairman and chief executive of both Sands China and Las Vegas Sands, said in a statement.

“We’ve been a part of the Macau community for more than a decade and our needs, along with our responsibilities to the people of Macau, have changed dramatically since we opened the Sands Macao in 2004. As president of Sands China, Wilfred will be able to put his experience to work helping us chart a path for our next decade of success in Macau,” Mr Adelson added.

Mr Goldstein, commenting on the appointment, said Mr Wong’s career in business and public service will “provide the company with a different set of perspectives, insights and approaches that will be valuable to Sands China in the future”.

“Putting Wilfred together with our seasoned management team in Macau strongly positions the company to continue to execute our strategy and maximise the important opportunities ahead of us,” he stated.

Brokerage Sanford C. Bernstein Ltd said on Tuesday, in a note issued in Hong Kong, it believed “Mr Wong’s primary responsibility will be to act as Sands’ liaison” with the Macau government and the Chinese central government.

“This appointment comes at a critical juncture in Macau as the government is currently conducting its mid-term review of the gaming concessions and allocating gaming tables to new casino projects (including Sands’ Parisian),” wrote analysts Vitaly Umansky, Simon Zhang and Bo Wen.

Macau’s casino gross gaming revenue (GGR) for the first five days of February is estimated at MOP1.9 billion (US$235.1 million) – or MOP380 million per day – a level that suggests a “45... END_OF_DOCUMENT_TOKEN_TO_BE_REPLACED