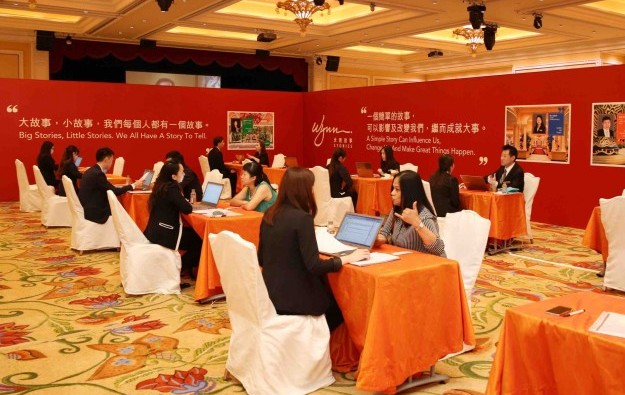 Macau-based casino operator Wynn Macau Ltd has announced the hiring of about 2,600 local employees for its Wynn Palace casino resort, which is under construction on Cotai. In addition, approximately 1,000 employees will be transferred from the company’s existing casino resort Wynn Macau, in the city’s downtown area, to the new Cotai property, the firm said in a press release on Tuesday.

The company also noted that it was promoting members of its existing team to new roles at Wynn Palace. “Up until May, more than 200 local employees will be promoted, as Wynn Palace understands the necessity of prioritising the upward mobility of local residents,” it said.

The management of Wynn Resorts Ltd – the U.S.-based parent company of the Macau-based casino operator – noted that about US$100 million of labour costs was to shift from Wynn Macau to Wynn Palace on an annual basis.

Speaking at an investor presentation in Las Vegas earlier this month, Matt Maddox, president of Wynn Resorts, said Wynn Macau was carrying an additional US$75 million to US$100 million of payroll related to a “couple of thousand people” that would be transferred to Wynn Palace.

Steve Wynn, the firm’s chairman and chief executive, said in the same occasion: “In the weeks preceding the opening of Wynn Palace, Wynn Macau in the peninsula sheds a US$100 million a year in expenses.”

The US$4.1-billion Wynn Palace casino resort on Cotai is likely to open in August, according to the firm’s management. The property had been scheduled to open on June 25, after a plan to launch it on March 25 was dropped.

The imminent return of package tours from mainland China will not only help boost Macau’s tourism businesses, but is also expected to help casinos gain more foot traffic in their mass gaming... END_OF_DOCUMENT_TOKEN_TO_BE_REPLACED