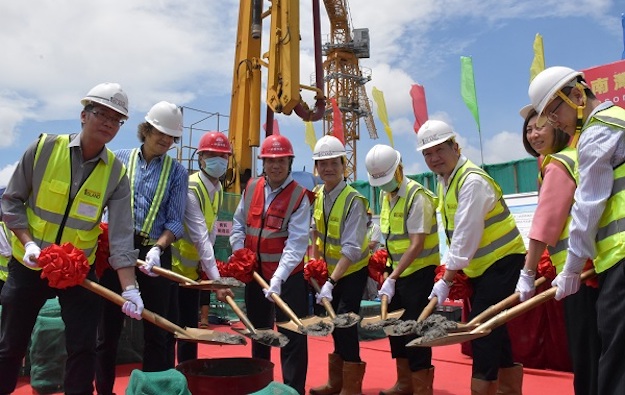 Macau casino operator Wynn Macau Ltd told GGRAsia the company is not involved in a new hotel project being developed by an entity linked to Genting Hong Kong Ltd. The scheme, being developed on a waterfront reclaimed site at the Nam Van area in the Macau peninsula, had its topping-off ceremony (pictured) last month, according to the project’s contractor, China Civil Engineering Construction Corp (CCECC).

A recent release from CCECC identified Wynn Macau Ltd’s vice chairman Linda Chen as one of the guests that had attended the ceremony. Ms Chen is also the chief operating officer and an executive director of Wynn Macau Ltd. The company operates two casino resorts in Macau.

The casino firm confirmed to GGRAsia that Ms Chen had been “invited as a guest” to attend the topping-off ceremony of the hotel project promoted by the Genting group.

“Wynn [Macau Ltd] is not involved in the [hotel] project,” the firm said in its statement in response to our questions on whether the firm had invested in the hotel project or if it had a gaming licensing agreement for its casino licence to be used at that property.

According to Genting Hong Kong’s report, Treasure Island is engaged in developing “hospitality facilities in Macau”. The Hong Kong-listed company identified the Macau project as a “hotel/casino” scheme, saying that the gaming component of the project was “subject to the approval from the Macau government.”

The project sits on a land plot with an area of approximately 8,100 square metres (87,182 sq feet), according to the annual report.

The press release from CCECC said that the chairman of Treasure Island, Yany Kwan, was also one of the officiating guests at the topping-off ceremony in June.

GGRAsia has approached Genting Hong Kong and Mr Kwan for comment regarding the project, but did not receive a reply by the time this story went online.

“This [hotel] project marks a monumental step for the company in terms of gaining experience in building large-scale, high-end hotel projects,” said CCECC in its release.

The Chinese state-owned contractor said it would now start works related with “furnishing” and the “installation of mechanical and electrical systems” at the hotel project. It made no mention to a schedule to complete construction of the scheme.