Wynn Macau to run some electric buses from May 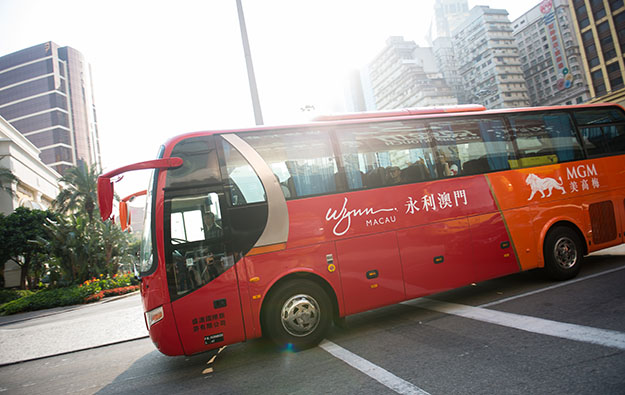 Wynn Macau Ltd became on Tuesday the fifth of Macau’s six casino operators to give an update in recent weeks on policy regarding use of so-called “clean energy” vehicles for customer shuttle buses.

The firm – a unit of U.S.-based casino group Wynn Resorts Ltd – said it believed the introduction of what it termed “electric shuttle buses” for its Macau operations would benefit the local environment.

The Macau unit said that in an “initial stage” it had bought eight “clean energy buses”.

“The zero-emission fleet includes six tour coaches and two public bus-style vehicles, and [the vehicles] are expected to enter service in May 2018,” stated the release.

It added the move was “in support of the environmental policies of the Macau SAR government and the objective of ensuring the sustainable development of Macau”.

In mid-March, the head of Macau’s Transport Bureau, Lam Hin San, noted he hoped that by the year 2023 the city’s six casino operators would be exclusively using what he termed clean-energy vehicles in their customer shuttles. He noted at the time that the local gaming industry had made a commitment to the government that at least 15 percent of the passenger buses run by each casino licensee would be powered by clean-energy sources – either electricity or compressed natural gas – by May 1 this year.

Wynn Macau said in its Tuesday release that it had been working since 2016 to reduce the number of casino shuttles on the city’s roads, by running with another local casino operator a joint service (pictured) from Macau’s Border Gate with Zhuhai to venues of the respective firms.

On Monday local casino firm Sands China Ltd said a quarter of its casino shuttle vehicles were being powered by compressed natural gas, and the firm aimed to have 30 percent of its fleet using “clean energy” by year-end.

Macau casino operator SJM Holdings Ltd announced on April 19 that one of its subsidiaries would introduce what it termed a “new-energy” shuttle bus service in Macau starting from May. The number of such buses would be increased gradually, the firm stated in a press release.

Last week Melco Resorts and Entertainment Ltd said it had purchased 20 electricity-powered buses to serve its Macau properties, starting from May. In March, Galaxy Entertainment Group Ltd stated it had become the first of the city’s gaming concessionaires to launch regularly-scheduled electrically-powered shuttle buses to transport patrons.

A Macau court was told on Wednesday that Asian American Entertainment Corp Ltd (AAEC), led by Taiwan businessman Marshall Hao Shi-sheng, was to blame for its failed tie-up with United States-based... END_OF_DOCUMENT_TOKEN_TO_BE_REPLACED