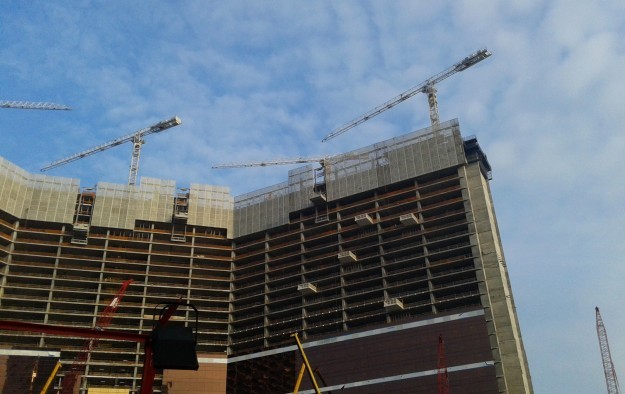 Wynn Macau Ltd is now referring to its new Cotai casino scheme in Macau as an “approximately US$4.1 billion” project. It said so in a filing to the Hong Kong Stock Exchange on Sunday. The document reported the first quarter results of the parent Wynn Resorts Ltd and gave an update on the construction of the new Cotai venture, Wynn Palace (pictured in a file photo earlier this year).

In a filing to Nasdaq in New York on February 27, Wynn Resorts had described Wynn Palace as “our [US]$4.1 billion casino resort”. Prior to that the parent firm’s chairman Steve Wynn had said the cost for Wynn Palace was US$4 billion “all in”.

Mr Wynn was asked on a conference call on April 28 – to discuss the group’s first quarter 2015 earnings – whether it would be possible to scale back the Wynn Palace project given the current uncertainties in the Macau gaming market. He said it wasn’t, but that people shouldn’t infer that the firm was going to lose money in Macau.

The city’s gross gaming revenue fell year-on-year for the 11th month in succession in April, according to government data.

Some analysts had been predicting a pick up in Macau gaming revenue in the second half of this year. But on May 5, Macau’s Secretary for Economy and Finance Lionel Leong Vai Tac said he couldn’t predict if and when such a recovery might occur.

Sunday’s Wynn Macau filing reiterated that the general contractor for Wynn Palace – Leighton Contractors (Asia) Ltd – had “notified the company that it will not achieve the early completion milestone on January 25, 2016.”

The filing added: “However, the general contractor stated it is on schedule to complete the project on or before the substantial completion date. The company continues to expect to open the property in the first half of 2016.”

Mr Wynn had mentioned during the first quarter earnings call that Wynn Macau had received a mixed response from the Macau government regarding its request for construction labour for Wynn Palace.

A note from Daiwa Securities Group Inc in February had indicated labour restrictions were a factor in Wynn Palace being likely to miss the Chinese New Year 2016 opening date originally sought by Mr Wynn.

Some Macau casinos visited by GGRAsia on Thursday, actually had tables that were closed, notwithstanding strong consumer demand during Chinese New Year (CNY). The reasons for some tables being... END_OF_DOCUMENT_TOKEN_TO_BE_REPLACED