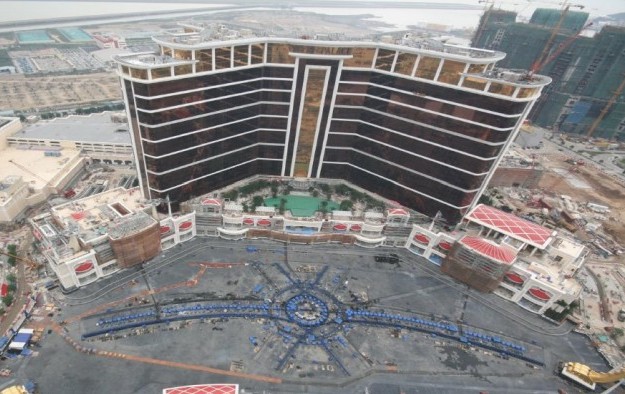 The US$4.1-billion property (pictured) was scheduled to open on June 25, after a plan to launch it on March 25 was dropped.

“We hope to open [Wynn Palace] in July or maybe the first week of August,” Mr Wynn said at an investor presentation in Las Vegas on Wednesday. “We’re thinking of 8/8 [August 8 for the opening] – sort of lucky numbers,” he added.

The number eight in Chinese culture indicates prosperity and wealth because it sounds like the Chinese word for “becoming rich”.

In December, Mr Wynn said that were the main contractor of Wynn Palace unable to meet the June 25 deadline it would be liable for a “US$1.5 million-a-day penalty”.

Matt Maddox, president of Wynn Resorts, said the firm expected the Wynn Palace tower to “be fully back to us in June”. “We think construction will be finished in July; [we will] turn the place into a campus and train [staff], and open sometime in August,” Mr Maddox added.

Several brokerages had already said they expected Wynn Palace’s opening date to be in the second half of 2016.

“The Cotai project appears to be an August event, which is in line with the August 15, 2016 opening in our model,” said Deutsche Bank Securities Inc in a note on Wednesday.

Capital expenditure on Wynn Palace through February totalled US$3.63 billion, with US$469 million left to spend, Wynn Resorts said in Wednesday’s presentation.

At Wednesday’s conference, the casino operator’s management also presented forecasts for the Macau market in 2017. It assumes the firm would have an overall gross gaming revenue (GGR) share in the range of 15 percent to 19 percent, which implied annual GGR of US$4.44 billion to US$5.63 billion.

The management estimated adjusted property earnings before interest, taxation, depreciation and amortisation (EBITDA) of between US$1.17 billion and US$1.55 billion for 2017, with Wynn Palace contributing with about US$630 million to US$850 million.

“Predicated on our Macau GGR forecasts … we believe the fair share implied EBITDA could be [circa] US$1.115 billion, once Cotai is stabilised,” said Deutsche Bank’s analysts Carlo Santarelli and Danny Valoy.

“Wynn Macau has generated a solid EBITDA fair share premium … over the years, though competition and the slowing of the VIP business, to which Wynn Macau had been more exposed from a mix perspective, have eroded some of the premium,” said the brokerage’s analysts.

Wynn Resorts management noted that about US$100 million of labour costs would shift from Wynn Macau on the peninsula to Wynn Palace on an annual basis.

The casino operator also detailed its EBITDA contribution by segment for the Macau operations, saying that it recorded a mass gaming EBITDA mix of 62 percent – inclusive of slots – in 2015. “Sixty percent of our mass revenue is ‘premium’ in Macau, including slots,” said Wynn Resorts’ Mr Maddox.

In addition, Mr Wynn discussed plans to build a new entertainment area in Las Vegas, likely to be called Wynn Paradise Park. The expansion – to be constructed on real estate that currently houses the Wynn Golf Club – will include a 1,000-room hotel, a casino, meetings and convention space, and dining and retail areas surrounding a lagoon.

Wynn Resorts expects to have the details of the project completed around the September/October period, according to Deutsche Bank’s note. “All in, we estimate the project could be in the US$1.5 billion range,” said Mr Santarelli and Mr Valoy.

The imminent return of package tours from mainland China will not only help boost Macau’s tourism businesses, but is also expected to help casinos gain more foot traffic in their mass gaming... END_OF_DOCUMENT_TOKEN_TO_BE_REPLACED