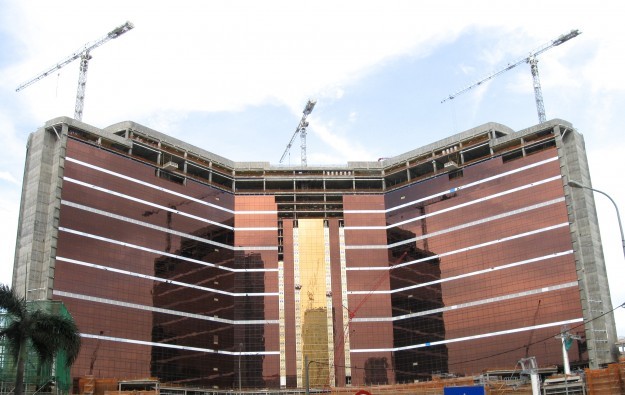 Mr Wynn added that the Macau government had already approved the final batch of construction workers the company had requested for the site. He said construction and staffing were on schedule to meet the March 25 opening date.

Wynn Macau has previously described Wynn Palace as a US$4.1 billion casino resort project. The company invested US$431.4 million in the Cotai project during the second quarter, taking the total investment to US$2.7 billion through to the end of June.

Wynn Macau posted a year-on-year decrease of 62.5 percent in net profit for the second quarter, to US$73.6 million, using International Financial Reporting Standards (IFRS), the company announced on Wednesday.

The decline was caused by a 36.4 percent slump in casino operating revenue, to US$578.1 million, the Macau gaming firm said in a filing to the Hong Kong Stock Exchange. The company, which currently only operates one property – casino-hotel Wynn Macau on Macau peninsula – also recorded a decline of one third in operating revenue from its shops, its second most important business segment, to US$27.2 million.

Table drop in the mass-market segment at Wynn Macau was US$1.2 billion for the period, down 16.5 percent from the 2014 second quarter. Slot machine handle declined 29.5 percent to US$1.0 billion.

Net income at parent Wynn Resorts for the second quarter of 2015 was US$56.5 million, or US$0.56 per diluted share, compared to US$203.9 million, or US$2.00 per diluted share respectively, in the second quarter of 2014. The company said the decline was a result of the lacklustre results in its Macau operations, but also of softer performance in the United States, where Wynn Resorts owns and operates Wynn Las Vegas and Encore resort, in Las Vegas, Nevada.

Wynn Resorts also announced a cash dividend of US$0.50 per common share. This dividend will be payable on August 20 to stockholders of record on August 11.

The stock prices of Hong Kong-listed firms directly linked to Macau casino operations rose in Monday trading, following the Saturday announcement that the six incumbent licensees had each been... END_OF_DOCUMENT_TOKEN_TO_BE_REPLACED