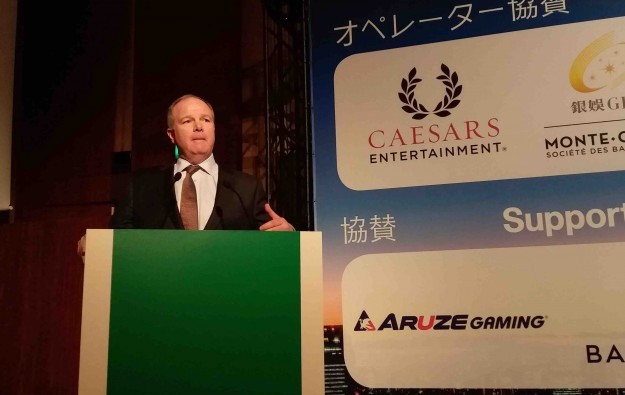 An executive of U.S.-based casino operator Wynn Resorts Ltd says the recent string of negative events involving the firm is not impacting the way the group is being perceived in Japan. Wynn Resorts has declared itself a contender for a Japan casino licence.

“We have been very well received” by the Japanese authorities, Wynn Resorts Development LLC president Chris Gordon (pictured) told GGRAsia on Thursday on the sidelines of the Japan Gaming Congress in Tokyo.

Wynn Resorts Development is a subsidiary of Wynn Resorts. The latter is also the parent company of Macau-based casino operator Wynn Macau Ltd.

Wynn Resorts has faced turmoil since late January following allegations of sexual misconduct against its founder and former chairman and chief executive Steve Wynn. Mr Wynn has denied the claims against him, but resigned from the group in February and has since sold his entire stake in the firm.

The allegations of sexual misconduct have led regulators in the United States – particularly in Massachusetts, where Wynn Resorts is developing a casino resort – to launch probes into the matter.

In other developments, Mr Wynn’s ex-wife Elaine Wynn is publicly lobbying for changes to the current leadership of Wynn Resorts, to remove directors that she claims are connected to her ex-husband.

“I think all the issues that are going on should be methodically resolved,” Mr Gordon told GGRAsia in Japan. “I think we should listen to any of the outcome of any of the [regulatory] reports and take any action required.”

He added: “We think the company has an incredibly bright future.”

In separate comments made during a presentation at the Japan Gaming Congress, Mr Gordon said Wynn Resorts aimed to achieve a higher proportion of non-gaming revenue as compared to gaming revenue if it eventually wins a licence to develop a casino resort in Japan. That would be similar to the group’s Las Vegas property, where non-gaming accounts for 60 percent-plus of all revenue.

“We would like to get Japan at that level… Gaming revenue will probably be a little higher than non-gaming initially,” he said.

Highlighting some of the main ideas of Wynn Resorts for a casino resort in Japan, Mr Gordon said it should predominantly promote Japanese culture, from architecture to service, food and design.

Mr Gordon added that a casino resort in Japan could feature total accommodation capacity of between 3,000 and 5,000 hotel rooms. “That is a lot of beds, that is a lot of work, but we think it is definitely supportable, we think it is necessary to feed the different kinds of businesses,” he said.

The two-day Japan Gaming Congress is discussing topics related to Japan’s nascent casino industry, which some investment analysts say could move nearer to realisation with the possible passage this year of the Integrated Resorts (IR) Implementation Bill.

It is likely that Macau will shortly have a third round of citywide centre-based Covid-19 testing in little more than a week, after the results so far of a second mass test – that was due to finish... END_OF_DOCUMENT_TOKEN_TO_BE_REPLACED