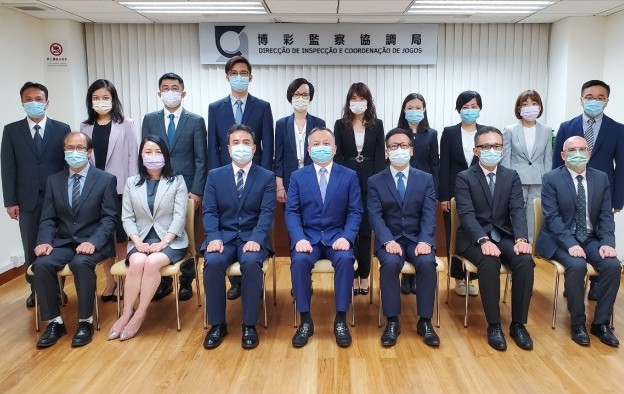 Macau’s casino regulator, the Gaming Inspection and Coordination Bureau, held on Wednesday a swearing-in ceremony (pictured) for 14 newly-appointed staff at either departmental- or divisional-chief level.

The appointees represent a net increase in the number of management personnel for the gaming bureau. They would help the organisation – a body also known as DICJ – in strengthening its inspection capacity and in “enhancing gaming-related legislation”, according to a Wednesday statement from the regulator, citing its director, Adriano Marques Ho (pictured front row, centre).

Macau is due to update its gaming law before the end of this year, prior to an anticipated new public tender for Macau gaming rights, associated with the June 2022 expiry of the six current licences.

The newly-arrived departmental and divisional chiefs at DICJ will respectively be responsible for functions including legal matters and licensing, auditing and compliance, and the overall regulation of the city’s gaming concessionaires, junkets, and gaming technology, including any investigations that might be required.

The appointments are part of the gaming regulator’s restructuring. In June the Macau government said the gaming regulator would see its number of posts gradually expanded from 192 to 459, in response to the “huge increase” seen in the tally of the city’s gaming venues. The proposed rejig includes also adding an extra post at deputy-director level at the casino regulator.

Macau mass-market casino gross gaming revenue (GGR) for the recent Chinese New Year (CNY) holidays could have recovered to at least 60 percent of that for the 2019 break, when the festivities were in... END_OF_DOCUMENT_TOKEN_TO_BE_REPLACED