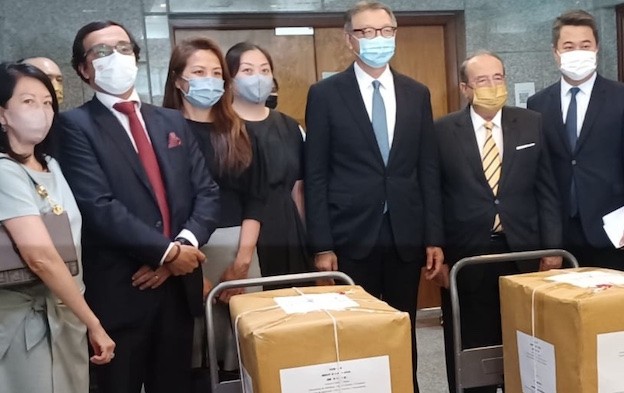 Macau’s current six operators had by 3.30pm on Wednesday – two hours and 15 minutes before the deadline – submitted their respective applications for the city’s public tender to award new 10-year casino rights.

The ultimate of the existing operators to submit its paperwork was Galaxy Entertainment Group Ltd (pictured).

Francis Lui Yiu Tung (pictured third right), Galaxy Entertainment’s deputy chairman, said in comments to the media at the handover: “We are confident that… the government will consider our bid” in terms of the adequacy of the submission.

He added: “We have done a lot of preparation work. In the past 20 years, we felt that in every aspect – the economy here, livelihoods, our investments, [our] youth training, corporate social responsibility and charity – we have performed satisfactorily.”

Mr Lui further stated: “So, we would want to gain a chance to help with Macau’s development.”

When asked about the prospects for the gaming sector in Macau, Mr Lui said his company was still “very confident” in the mid- and long-run, despite the “difficult time” currently.

He was also quizzed on whether the 11 areas for non-gaming development mentioned in the tender requirements were challenging to meet. “I believe with the bid, the government spells out more clearly its requirements for the operators,” said Mr Lui.

Each proposal was submitted by a locally-incorporated unit of the incumbents. Some of the submissions were witnessed by GGRAsia.

Pansy Ho Chiu King, co-chairperson of MGM China, stated on Wednesday as she attended the delivery of her firm’s paperwork, that the group had “confidence” in the strength of its application.

She added: “We had started preparing the bid a year ago.”

In earlier remarks in a press release, Lawrence Ho Yau Lung, chairman and chief executive of Melco Resorts, had said his group’s proposal “reinforces our commitment to Macau and the further diversification of its economy”.

The Macau government has said it wants to see more foreign customers for the city’s casinos, and more non-gaming products.

“No one has been a bigger believer in Macau’s long-term success as a leisure and business tourist destination than we have,” said the group chairman.

He added: “Investments in our world-class assets, our team members and the local community are a testament to our overall commitment to Macau and this tender submission reiterates our long-standing strategy of continuous investment in Macau.”

“We eagerly look forward to continuing to work closely with the Macau government in contributing to the prosperous and sustainable development of Macau,” she added.

Macau’s casino gross gaming revenue (GGR) for the first five days of February is estimated at MOP1.9 billion (US$235.1 million) – or MOP380 million per day – a level that suggests a “45... END_OF_DOCUMENT_TOKEN_TO_BE_REPLACED