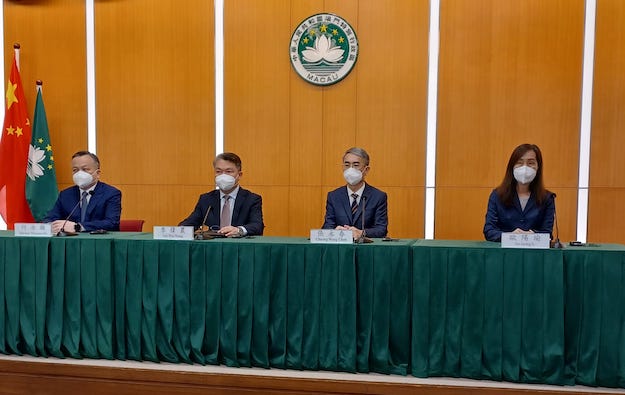 The chairman of the Macau committee tasked with vetting bidding casino firms for up to six, 10-year concessions in the city, says he hopes the process can be completed this year, in time for the new concessions to start on January 1, 2023. The fresh public tender for Macau gaming rights will be launched on Friday (July 29) and run until September 14, 2022, according to a Thursday announcement.

André Cheong Weng Chon (pictured centre, right), Macau’s Secretary for Administration and Justice, made the ‘January 1′ comment on Thursday, at a press briefing of the Committee for Public Tendering of Concessions for the Operation of Casino Games of Fortune. The body is responsible for selecting any winners from the new public tender process.

Mr Cheong said the committee would do its “utmost” to make sure that the “tender requirements are fair” to the six existing operators, and for “any other bidders”.

By the end of this year, the authorities expected to have compiled a confirmed list of new concessionaires, and finished negotiations on the concession contract terms, he added.

In response to a question from GGRAsia, the committee chairman said the city’s government did not consider the bid submission period “too short”. This time it was 48 days, compared to 33 days at the time of the last public tender for Macau gaming rights, back in 2001, said the senior official.

Mr Cheong also stated the government did not intend to grant any fresh land for casino development, subsequent to the award of new concessions.

The formation of the tender committee had been announced on Wednesday. Its secretary is Adriano Marques Ho (pictured, far left), director of Macau’s casino regulator, the Gaming Inspection and Coordination Bureau.

The rules for the new tender were outlined in Executive Order 136/2022 on Thursday, in Macau’s Official Gazette.

According to the executive order, interested parties will have to submit their respective proposals before 5.45pm, Macau time, on September 14. These companies must provide a range of required qualification documents, and a deposit of at least MOP10 million (US$1.2 million).

The tender document itself, specifies the factors that will be taken into consideration when evaluating the bids, including a company’s proposal to expand Macau’s reach in attracting tourists from foreign countries.

On the topic, Mr Cheong touched on the power of a Macau chief executive to reduce tax payable on casino gross gaming revenue (GGR) as an incentive for operators to bring in more customers from overseas.

Macau’s amended gaming law sets the tax payable on casino GGR at 40 percent, although it gives an incumbent Macau chief executive the discretion to reduce such tax burden by up to five percentage points for “reasons of public interest”, “namely” attracting “customers from foreign countries”.

Asked on Thursday how the government would assess the trigger and calculate the actual level of tax reduction, Mr Cheong said the topic would be dealt with in a separate regulation.

Mr Cheong also mentioned that so-called ‘satellite’ casinos in the city’s market would eventually be able to continue to operate, if they meet the requirements of Macau’s recently-amended gaming law.

But such venues that do not already belong to an existing concessionaire, would not revert to the government at the end of the current concessions, he noted.

The Macau government had already solicited and accepted applications by the six incumbent operators to have their licences extended until the end of the calendar year, as the Macau authorities worked to prepare the fresh public tender process.

The imminent return of package tours from mainland China will not only help boost Macau’s tourism businesses, but is also expected to help casinos gain more foot traffic in their mass gaming... END_OF_DOCUMENT_TOKEN_TO_BE_REPLACED