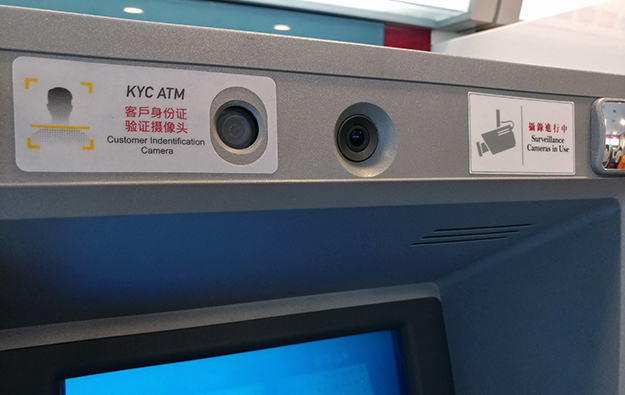 Macau already has in operation a total of 680 automated teller machines (ATMs) with the ability to perform facial recognition scans, in a bid to strengthen the city’s “know your customer” (KYC) protocols. The news was disclosed by the Macau government in a Thursday press release.

Currently, only holders of mainland China-issued UnionPay bank cards are required to have their identity verified by the facial-recognition software when withdrawing cash from these ATMs.

“As of June 26, 680 ATMs had been fitted with [KYC] technology and put into operation,” the government release stated. It added that the Monetary Authority of Macao was pushing local banks for all non-compliant ATMs to be upgraded by year-end, including those located inside casinos and neighbouring areas.

The Macau government release did not mention the total number of ATMs in operation in Macau. In 2016, the city had an average of 294.8 ATMs per 100,000 adults, according to the International Monetary Fund. Macau had in 2016 an adult population of around 500,000 people, data from the city’s Statistics and Census Service show.

“Know your customer” protocols aim to strengthen bank and anti-money laundering regulations by ensuring businesses can properly identify and verify the identity of customers.

The Macau government had announced in May that holders of mainland China-issued UnionPay bank cards that wished to use them at Macau ATMs would soon have to present their identity card and pass a facial recognition scan to be able to withdraw cash.

At the time, it was said the new technology would cover “all ATM machines in Macau, including those inside casinos and neighbouring areas”.

Commenting on the new customer verification technology at local ATMs, the head of Macau’s gaming regulator, Paulo Martins Chan, said on Friday he did not expect the actual impact on gaming revenue to be meaningful.

Last year, shops in Macau began introducing China UnionPay bank card payment terminals that require holders of China-issued cards to submit an identity document for scanning before their purchase can be confirmed.

A number of gaming industry analysts have previously noted that a purchase in Macau made via a UnionPay card – followed rapidly by a return of the goods in exchange for a cash refund – is one of the common ways for some casino gamblers from mainland China to circumvent the country’s strict currency-export controls. Mainland visitors are only allowed to take a daily limit of CNY20,000 (US$2,955) out of China in cash.

Last December, the Monetary Authority of Macao had set a limit of MOP5,000 (US$626) or HKD5,000 per transaction for withdrawals in the city’s ATMs using bank cards issued by mainland China lenders. The daily withdrawal limit with the use of such cards remained at CNY10,000, or at an annual withdrawal limit of CNY100,000.

Paradise Co Ltd, an operator of foreigner-only casinos in South Korea, reported casino revenue of nearly KRW48.65 billion (US$39.8 million) for January 2023, according to a Thursday filing to the... END_OF_DOCUMENT_TOKEN_TO_BE_REPLACED