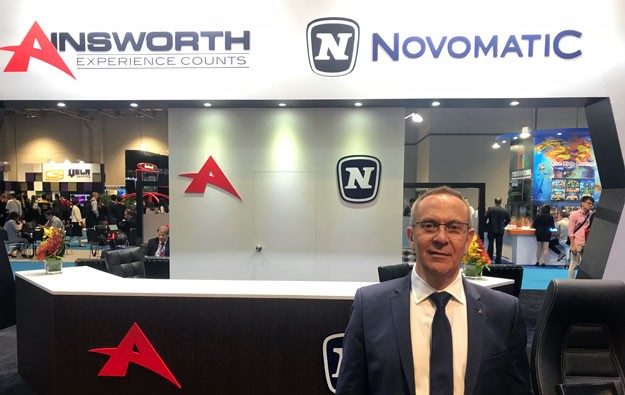 Australia-based slot machine maker Ainsworth Game Technology Ltd says that the firm’s chief executive, Lawrence Levy, is to step down from the role effective on Friday, September 10. Mr Levy (pictured in a file photo) has been the group’s CEO since July 2019.

Mr Levy “has advised the company of his intention to resign from the role … effective Friday, 10 September 2021,” said Ainsworth in a Wednesday filing.

In the same statement, the company said that Harald Neumann will be appointed as the firm’s new CEO from October 1.

“Mr Neumann’s appointment in the role is subject to regulatory approvals and the completion of contractual details,” stated Ainsworth.

Mark Ludski, Ainsworth chief financial officer, will assume the role of interim CEO until the appointment of Mr Neumann takes effect. That is “to ensure continuity of leadership and oversight of the company’s operations,” stated the filing.

Mr Neumann has been a director of Ainsworth since February 2017. He will remain a director of the company at the present time, albeit in an executive capacity from October 1, according to the filing to the Australian Securities Exchange.

Mr Neumann was previously CEO of Austria-based gaming equipment maker and operator Novomatic AG. He stepped down from that role in February 2020. The Novomatic group is the controlling shareholder of Ainsworth.

“On behalf of the board, we thank Lawrence for his contribution through challenging times. Lawrence has decided to resign for personal reasons, and we wish him well,” said Danny Gladstone, Ainsworth’s chairman, in prepared remarks included in Wednesday’s filing.

Mr Gladstone said: “We are fortunate to be able to appoint Harald as our new CEO. As the former successful CEO of Novomatic AG, our major shareholder, and a director of Ainsworth, he brings a wealth of knowledge and experience to the role with a thorough understanding of Ainsworth.”

He added: “Harald will be based in Las Vegas where he can lead Ainsworth in our largest market continuing to drive growth and recovery.”

The slot machine maker reported last month a full-year loss after tax of AUD53.4 million (US$38.7 million), up from AUD50.1 million a year earlier.

The company said in a filing that the effects of Covid-19 “impacted” the group’s financial performance in the 12 months to June 30, as it recorded “one-off non-cash impairment charges” during the period. Nonetheless, the company said it saw a recovery in the second half of its financial year.

Macau mass-market casino gross gaming revenue (GGR) for the recent Chinese New Year (CNY) holidays could have recovered to at least 60 percent of that for the 2019 break, when the festivities were in... END_OF_DOCUMENT_TOKEN_TO_BE_REPLACED