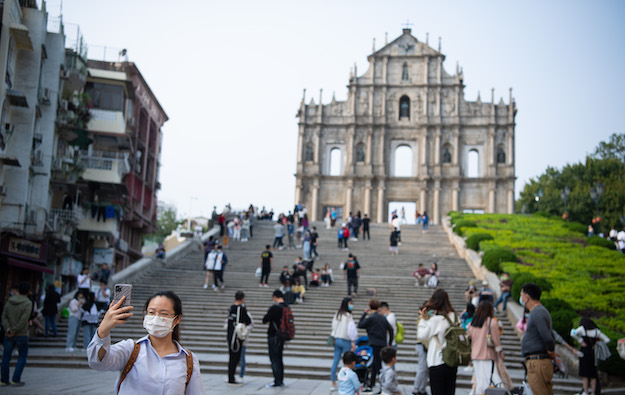 Visitor arrivals to Macau in April – most of them from mainland China – rose 5.3 percent month-on-month, and soared by more than 7,000 percent year-on-year. It was the highest monthly tally since the onset of the Covid-19 pandemic in February 2020, when inbound travel to the city was greatly curtailed by the mainland authorities, as a safety step.

This April, the city received a total of 794,819 visitors for the month, with 730,934 of those – i.e., 92.0 percent – from mainland China, according to data published on Monday by the city’s Statistics and Census Service.

In April, there were 300,467 visitors from the mainland via its Individual Visit Scheme (IVS) exit visa. That was a peak for IVS-enabled arrivals since the scheme was reintroduced across the country on September 23, after being suspended because of Covid-19.

As in previous months this year, most of April’s arrivals from the mainland – in this case 56.2 percent – were from neighbouring Guangdong province. An aggregate 410,612 mainland visitors from there; with the next-largest source markets being Fujian province – providing 34,194 arrivals – and Shanghai, supplying 30,445 arrivals.

There were 450,579 overnight stays in April, representing a sequential increase of 11.3 percent. The average length of stay for all arrivals was 1.6 days, with that of the overnight visitors being 2.9 days.

For the January to April period, Macau received an aggregate of just over 2.53 million visitors, according to the census service.

Despite the sequential increase seen in Macau’s monthly visitor tally, the April numbers were still far short of the more than 3.43 million visitor arrivals the city had handled in April 2019.

Macau had so far in 2021 seen a “stable” increase in visitor arrivals, said Macau Government Tourism Office (MGTO) director, Maria Helena de Senna Fernandes, in comments to local media on the sidelines of the official launch on Saturday, of Cotai casino resort Studio City’s new water park attraction. The tourism official said that following the Labour Day break in the first week of May, Macau’s daily visitor tally measured as an average ranged from “20,000 to 30,000” so far this month.

The average daily visitor tally might further go up to “over 30,000” during “summer” time, the MGTO boss estimated.

Macau mass-market casino gross gaming revenue (GGR) for the recent Chinese New Year (CNY) holidays could have recovered to at least 60 percent of that for the 2019 break, when the festivities were in... END_OF_DOCUMENT_TOKEN_TO_BE_REPLACED