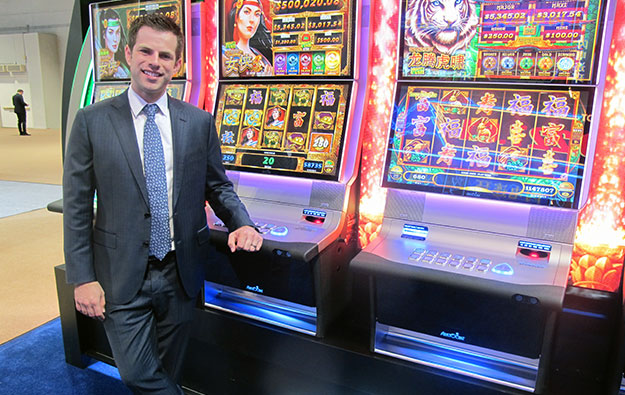 Helix+, the latest cabinet development by slot-machine maker Aristocrat Leisure Ltd, is making its Asian debut at the MGS Entertainment Show. The new cabinet is an evolution of the original Helix, featuring a larger screen.

MGS Entertainment Show – previously known as the Macao Gaming Show (MGS) – is an annual three-day event based in Macau that features a casino industry trade exhibition and conference. This year’s gathering – taking place at Cotai Expo in the Venetian Macao casino resort – ends on Thursday.

The Helix+ “is an upgrade of the Helix cabinet,” Christopher Rowe, Aristocrat’s new managing director – Asia Pacific, told GGRAsia. “The original Helix cabinet had a 23-inch monitor and the Helix+ features a 27-inch monitor on the same footprint,” he added.

The larger screen aims to provide a more immersive experience for players, Mr Rowe (pictured) said. There is cross-cabinet content compatibility between Helix and Helix+, according to the Aristocrat executive.

“Bigger and brighter is better: that is the trend at the moment,” Mr Rowe stated. “The performance of the machines with the larger screens has been better than that of those with smaller screens.”

While some suppliers are currently pushing forward game content able to run on generic devices, Mr Rowe told GGRAsia that Aristocrat had a different strategy.

“At Aristocrat, our mission is to create the world’s greatest gaming experience every day. And we believe that experience is comprised both of the cabinet and the game,” he said. “Aristocrat will still continue to innovate very much in both hardware and software and the marriage of those two things”.

Mr Rowe was promoted to the role of regional managing director earlier this year. He joined the firm in 2004. Prior to his most recent appointment, he was sales and business development director for Asia Pacific.

Mr Rowe told GGRAsia that Aristocrat had a “great year” in Asia in 2017. “We saw some continued growth within Macau, but what has been fantastic has been the growth around the region outside of Macau.”

Mr Rowe added: “We continue to enjoy great growth in Vietnam, in Cambodia and in the Philippines, and we are starting to see some movement even in Singapore. Asia is an exciting place to be at the moment.”

Looking ahead, the Aristocrat executive said he expected momentum to continue in 2018, with further regional growth outside the Macau market.

In Macau, the firm is expecting to post “some good numbers” in terms of product deployment at the upcoming MGM Cotai casino resort. The latter is to open on January 29, 2018, according to its promoter MGM China China Holdings Ltd.