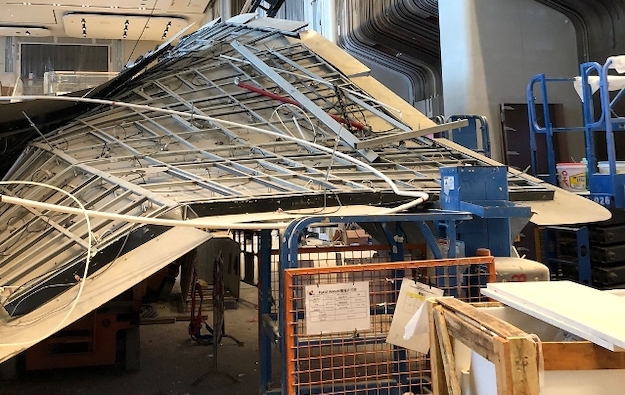 A false ceiling at the construction site of Phase 3 of casino resort Galaxy Macau collapsed on Saturday, leaving five people injured, according to a statement from Macau’s Fire Services Bureau.

The collapsed ceiling (pictured) covered a total area of 150 square metres (1,615 sq. feet), the Fire Services Bureau said. One of the injured workers fractured an elbow; another remained stuck under the collapsed ceiling, needing to be rescued by firefighters. The three other workers sustained minor injuries, according to media reports.

Galaxy Entertainment issued a statement following the incident stating the firm had urged contractors to investigate the matter. According to media reports, the casino operator said initial investigations suggested the collapse of the ceiling was related to installation works for a glass chandelier.

Macau’s Labour Affairs Bureau is now investigating the incident. The bureau said in a statement it had ordered the contractor to temporarily stop all construction work in the damaged area.

Management at Galaxy Entertainment said in August the firm expected that part of Galaxy Macau’s Phase 3 expansion could open to public “by early next year”. But group vice chairman Francis Lui Yiu Tung admitted at the time it was “very hard to determine the exact date of the opening” of Phase 3.

In its latest results update, Galaxy Entertainment mentioned Phase 3 and Phase 4 would have in total approximately 3,000 rooms, some casino space, a large-scale arena with 16,000 seats, and 400,000 sq. feet of MICE space.

The group had previously said it would spend as much on Phase 3 and Phase 4 of Galaxy Macau as it had on Phase 1 and Phase 2, i.e., circa HKD43 billion, or about US$5.5 billion. But that indication was made well before the pandemic. No budget was mentioned in the first-half results or quarterly presentation, nor in the 2020 results issued in late March this year.

It is likely that Macau will shortly have a third round of citywide centre-based Covid-19 testing in little more than a week, after the results so far of a second mass test – that was due to finish... END_OF_DOCUMENT_TOKEN_TO_BE_REPLACED