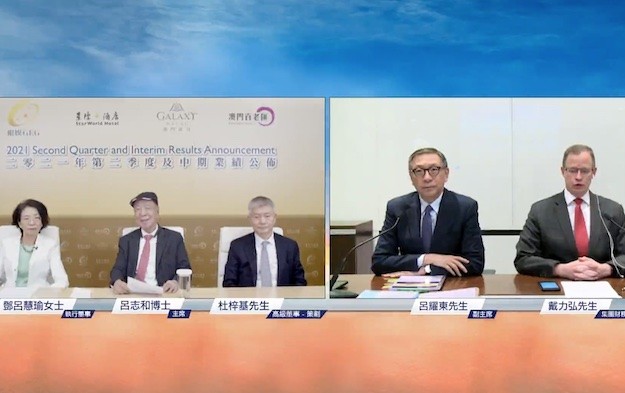 The pandemic makes it difficult to provide an exact opening date for Phase 3 of the Galaxy Macau casino resort, said on Thursday the vice chairman of its promoter Galaxy Entertainment Group Ltd, in a press conference delivered via video link, to discuss second-quarter and first-half earnings, which saw a return to interim profit and a 71 percent jump in revenue.

Francis Lui Yiu Tung (pictured, second right) – who was speaking from Macau – stated that as the pandemic was “not yet under full control” it was “very hard to determine the exact date of the opening” of Phase 3.

The firm has several times shifted the likely date of the launch.

The public health situation had to “a certain extent determined whether we can have the building materials, the building workers, who would come to Macau”, said Mr Francis Lui.

He added: “We hope that by early next year, part of the Phase 3 projects could be commissioned and could be open for business”.

In its first-half earnings statement issued to the Hong Kong Stock Exchange, the company modified its language to describe the target date for opening a Raffles-branded hotel with a 450 all-suite tower, due to be part of Phase 3.

In its first-quarter highlights in May, the firm had mentioned the “later part of 2021 or early 2022” for the launch of Raffles. In the first-half and second-quarter results issued on Thursday, it mentioned simply a target of “early 2022”.

In comments on Thursday, the group chairman Lui Che Woo (pictured, second left) mentioned that after Raffles, it was intended to launch the Galaxy International Convention Center and another hotel, called Andaz Macau, “in anticipation of the recovery of the meetings, incentives, conferences and exhibitions [MICE] and entertainment markets”.

In its latest results update, Galaxy Entertainment mentioned Phase 3 and Phase 4 would have in total approximately 3,000 rooms, some casino space, a large-scale arena with 16,000 seats, and 400,000 square feet (37,161 sq metres) of MICE space.

The group had previously said it would spend as much on Phase 3 and Phase 4 of Galaxy Macau as it had on Phase 1 and Phase 2, i.e., circa HKD43 billion, or about US$5.5 billion. But that indication was made well before the pandemic. No budget was mentioned in the first-half results or quarterly presentation, nor in the 2020 results issued in late March this year.

In February, the group announced it had signed a MOP13.01-billion (US$1.63-billion) deal with a local unit of China State Construction International Holdings Ltd for the building of Galaxy Macau Phase 4.

The vice-chairman noted in Thursday’s update it was “too early” to provide a forecast on return for Phase 3 and onward, “but we remain highly confident in the medium- and long-term business in Macau”.

In the company’s presentation deck, issued with the second-quarter earnings, Galaxy Entertainment confirmed that hotel operations at Broadway Macau, next door to Galaxy Macau, had been “suspended in the second quarter”.

In other comments, the group’s chairman said that although the company had decided against a dividend for the first half, despite returning to profit, it would do its best to declare one for the second half – trading conditions amid the pandemic permitting.

“We will try our very best,” he told the press conference.

The Galaxy Entertainment management was asked during the press conference to comment on the fact that there had been no indication so far from the Macau government on what would happen in relation to the expiry in June 2022 of the six Macau casino operators’ respective gaming licences.

The vice-chairman said the Macau government was focused currently on managing the pandemic conditions. Mr Francis Lui said he had confidence that the gaming licence issue would be handled in a timely way.

It is likely that Macau will shortly have a third round of citywide centre-based Covid-19 testing in little more than a week, after the results so far of a second mass test – that was due to finish... END_OF_DOCUMENT_TOKEN_TO_BE_REPLACED