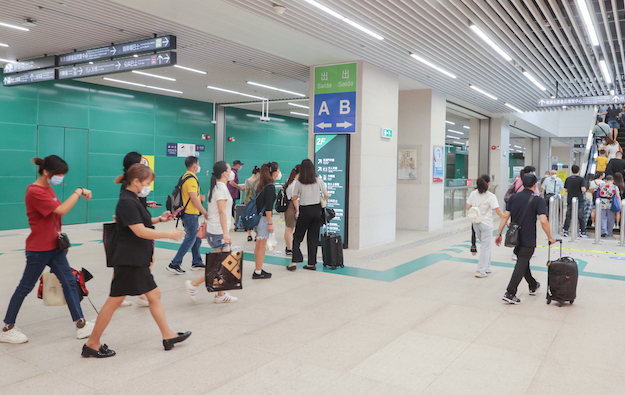 China has moved one step closer towards reopening, by relaxing some its Covid-19 control measures, with most infected people now able to quarantine at home rather than in state-sanctioned facilities.

Despite the major easing of its so-called zero-Covid policy, a Wednesday press conference in Beijing gave no indication of when the country might open up to foreign travellers, with an official saying in response to a reporter’s question, that the steps were aimed at domestic arrangements.

Macau has a policy aspiration to bring in more overseas customers to its casino resorts, but currently anyone wishing to enter the city via places outside China, must do a five-day quarantine at a centralised location, plus three days of ‘self-management’ of health at their home or hotel.

National Health Commission spokesperson Mi Feng said at Wednesday’s briefing that regarding policies for travel, and for preventing “imported cases”, China would continue to look for further “improvements” to its arrangements within the ambit of its laws and regulations.

There was though some potentially positive news for Macau during the State Council’s “Joint Prevention and Control Mechanism” update. On the mainland, infected people with no symptoms or those with mild infections would in future be allowed to quarantine at home for seven days, rather than undergo quarantine at a “centralised” facility.

The risk of having to undergo a pay-as-you-go quarantine either inbound to Macau if from a “high-risk” area of the mainland, or such a quarantine on the mainland when outbound from Macau, had been viewed by a number of investment analysts as being a damper on mainlander tourism to Macau.

It was also confirmed in China’s latest control guidelines that so-called “high risk” zones for Covid-19 transmission would be designated at a much smaller level – such as individual buildings, floors or units – rather than district-wide or city-wide as had applied previously.

Macau follows mainland standards, so there is a chance that Macau’s own easing steps, mentioned in general terms on Tuesday by Elsie Ao Ieong U, the city’s Secretary for Social Affairs and Culture, could follow in terms of specifics, those applied over the border.

Deputy head of the National Health Commission, Li Bin, said during the Wednesday press conference, that the latest version of the Covid-19 control guidelines were designed to be an “improvement” on previous versions, and were aimed as a “targeted” address to public concerns on how Covid-19 ‘positive’ cases and their close contacts should be treated.

The guidelines, formulated by the Covid-19 control task force of China’s State Council, mentioned that “risk areas” should not “arbitrarily expand” to whole residential areas, communities, and streets. Identified “high-risk” areas should also come out of lockdown in five days if no new cases are found.

The guidance, with broad details published prior to the Wednesday press conference, said that there would also be some reduction of the instances where nucleic acid test ‘negative’ certificates were required, or where digitally-issued health codes would need to be checked. The authorities also stressed the need to accelerate the vaccination of elderly people.

Some Macau casinos visited by GGRAsia on Thursday, actually had tables that were closed, notwithstanding strong consumer demand during Chinese New Year (CNY). The reasons for some tables being... END_OF_DOCUMENT_TOKEN_TO_BE_REPLACED