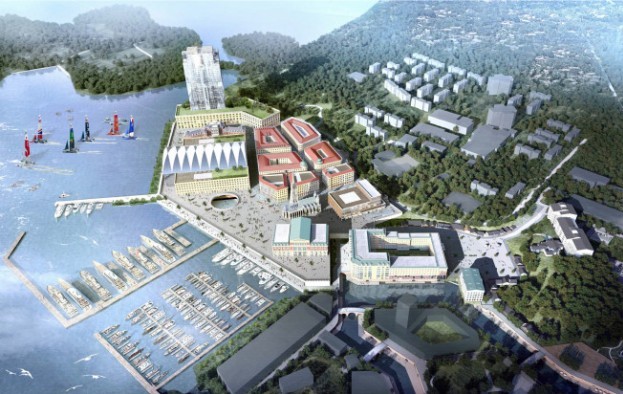 A public representative in a Japanese city tilting to host a casino resort has questioned – at local assembly level – whether a selected private-sector partner will be able to raise the money and form an effective consortium for such a large-scale scheme.

The issue was broached in the Nagasaki prefectural assembly on Friday, regarding the capability of chosen partner Casinos Austria International Japan Inc, in relation to its resort proposal (pictured in an artist’s rendering).

Similar questions had been raised in the Wakayama prefectural assembly in recent weeks, regarding the financial capability of Wakayama’s chosen private-sector partner for a casino resort, Clairvest Neem Ventures KK.

Lobby groups in Wakayama and in Nagasaki have respectively been calling for local referendums on the IR issue.

Friday’s Nagasaki prefectural assembly meeting was the second session of a question and answer opportunity for members regarding an integrated resort (IR) as large-scale casino resorts are known in that nation.

A Nagasaki assembly member queried whether JPY350 billion (US$3.09 billion) – the projected capital cost mentioned by Casinos Austria International – would be sufficient.

In response, the prefecture said it would present soon the draft of its IR-related District Development Plan to the assembly’s relevant committee, but without the information regarding consortium building and fund-raising.

The prefecture had said in October it was seeking more information from Casinos Austria International regarding project funding.

What is termed the November session of Nagasaki’s prefectural assembly runs from November 26 to December 21.

After it finishes, a public consultation on the casino proposal is due to take place.

Under Japan’s liberalisation programme for casino business, up to three resorts will be permitted nationally.

Currently, only three local communities are at an advanced stage for making an application to the national government. Aside from Nagasaki and Wakayama, the other is Osaka.

The choice of Casinos Austria International as Nagasaki’s IR partner has been queried by spurned suitors.

One of them, Hong Kong-listed investment group Oshidori International Holdings Ltd said in its first-half results filed on August 30, its experience of bidding to collaborate with the prefecture on a casino complex had led it to “question whether there have been serious ethical irregularities” in the process.

It was reported in Japanese media that the other rejected contender for Nagasaki – Niki Chyau Fwu (Parkview) Group, a Japanese enterprise – had also questioned the integrity of Nagasaki’s selection process.

Nagasaki prefecture has countered that the partner-selection process was conducted fairly and properly.

The stock prices of Hong Kong-listed firms directly linked to Macau casino operations rose in Monday trading, following the Saturday announcement that the six incumbent licensees had each been... END_OF_DOCUMENT_TOKEN_TO_BE_REPLACED