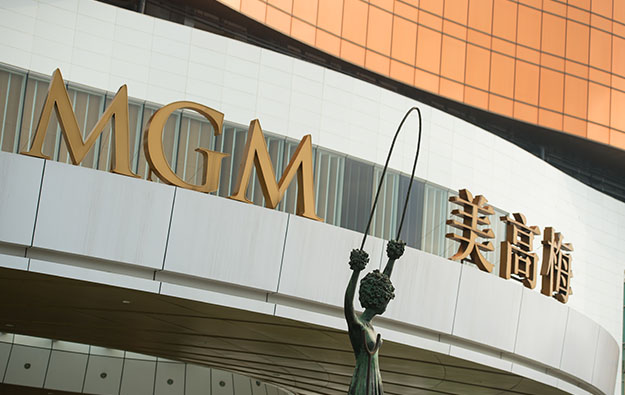 Macau-based casino operator MGM China Holdings Ltd is likely to report a 31-percent decline in full-2020 revenue, related to the negative impact of the Covid-19 pandemic on business. That is according to a note issued on Wednesday by Fitch Ratings Inc.

The credit research firm added that MGM China would in likelihood post a 50-percent decrease in earnings before interest, taxation, depreciation, amortisation, and restructuring or rent costs (EBITDAR) in calendar year 2020.

MGM China operates two properties in the Macau market: MGM Macau (pictured in a file photo) on the peninsula; and MGM Cotai in the city’s Cotai district.

The Macau government has halved its forecast  for the city’s casino gross gaming revenue (GGR) in full-year 2020, due to the negative impact of the Covid-19 pandemic on the local economy, and the gaming industry in particular. Such forecast for this year now stands at MOP130 billion (US$16.3 billion), down from a projected MOP260 billion, as announced in November.

The Macau authorities have been implementing a number of measures to stem the spread of a novel coronavirus that causes the disease Covid-19, a public health threat that has now reached pandemic – i.e., global – proportions. Such measures involved the closure of the city’s casinos for a 15-day period in February and stringent rules about who is allowed to enter the Macau region. Entry restrictions remain in place and have recently been tightened.

Fitch Ratings said on Wednesday it was downgrading the credit rating for MGM China – and its U.S.-based parent MGM Resorts International – to ‘BB-’ from ‘BB’, with a negative outlook. A rating of ‘BB’ is already considered by investors as of “speculative grade”.

The credit research firm said its negative outlook on the rating for MGM China and its parent reflected “the unknown depth and duration of the coronavirus disruption”.

It added: “At this time, the rating takes into account a gaming recovery that begins later this year and into 2021.”

Fitch Ratings noted however that MGM China and its parent were “well positioned from a liquidity standpoint to weather the near-term cash burn” related to a decline in business triggered by the Covid-19 crisis, with cash outflows to support operations surpassing cash inflows. The credit research firm pointed out that MGM China had an estimated US$270 million of cash on hand, and around US$580 million in credit revolver availability.

MGM Resorts is currently in a period of transition in its leadership. The firm announced on Sunday that Bill Hornbuckle, the firm’s chief operating officer and president, was taking over as acting chief executive from Jim Murren, the outgoing CEO. The job of chairman, previously held by Mr Murren in tandem with the CEO position, went to Paul Salem, a company board member and chair of its real estate committee.

It had been announced in mid-February that Mr Murren would step down from his leadership role prior to the expiry of his contract, which ran until the end of 2021.

MGM Resorts International announced on March 15 the suspension of operations at its properties in Las Vegas, Nevada, amid concerns linked to the spread of the Covid-19 virus. Days after MGM Resorts’ announcement about its Las Vegas operations, Nevada’s governor ordered a month-long closure – until at least mid-April – of the state’s casinos and other non-essential businesses like bars and cinemas, as part of efforts to contain the pandemic.

Macau’s Court of Final Appeal announced on Monday sentences in relation to a total of nine cases concerning debt claims involving junket operators based at local casinos. In all the cases, the... END_OF_DOCUMENT_TOKEN_TO_BE_REPLACED