Gaming areas in preview for Vietnam’s Hoiana from Sunday 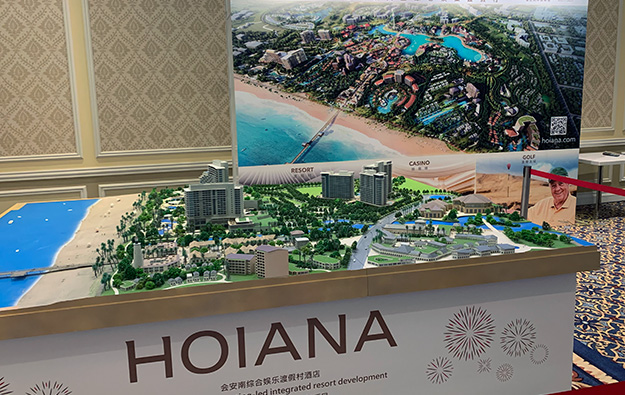 Suncity Group Holdings Ltd, a firm controlled by Macau junket boss Alvin Chau Cheok Wa, said in a Tuesday press release that it was to hold a preview from Sunday (June 28) for Hoiana, a Vietnam casino resort on the country’s central coast in which it is a 34-percent indirect investor.

“During this period, guests can enjoy cutting-edge entertainment and gaming facilities by Hoiana Suncity,” said the announcement.

Suncity Group Holdings told GGRAsia separately by email in response to our enquiry, that as “flights have not resumed yet,” to Vietnam, the “target audience” for the preview will be “the local expat community in Vietnam”. Hoiana is not one of the casino properties taking part in a government pilot scheme to allow locals to gamble.

In May the firm had announced that a casino business licence lasting until the year 2080 had been granted to the project.

Suncity Group Holdings’ Tuesday statement said that the resort’s golf course designed by Robert Trent Jones Jr, and the Hoiana Hotel and Suites – the first of four on-site hotels to be managed by Hong Kong-based Rosewood Hotel Group – would also be available during the preview period.

The announcement said the “operational preview” was “starting” on June 28, but did not mention how long it would last.

Suncity Group Holdings chairman Mr Chau was cited in the release as reiterating that the official opening of the resort would be next year.

Vietnam – in common with neighbouring countries in the region – had in recent months imposed restrictions on inbound travel to the country by foreigners amid the Covid-19 pandemic.

On Tuesday Japan’s Kyodo news agency reported that Vietnam and Japan had agreed some easing of travel between the places. On Monday it was reported that Cambodia was lifting its ban on cross-border movement on its border with Vietnam.

Additionally, on Tuesday the website of the Vietnam National Administration of Tourism had stated that only Vietnamese nationals, foreigners on diplomatic or official business, and highly-skilled workers were currently allowed to travel to Vietnam, reported on Wednesday TTR Weekly, a travel trade publication.