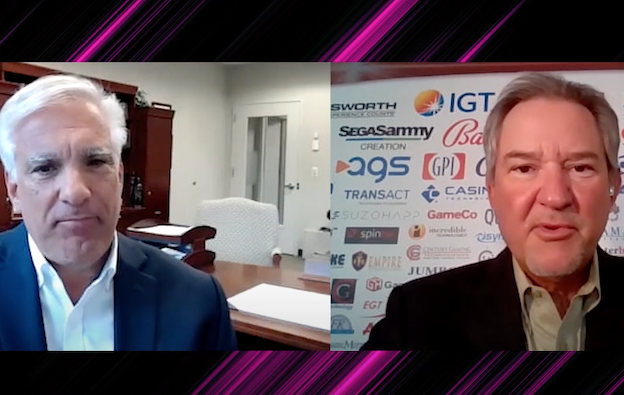 “I do see a casino of the future where the idea of counting cash and all the burdens associated with that will go away,” said Mr Prater.

His remarks were in an online conversation with James Maida (pictured, left), president and chief executive of gaming technology testing service and consultancy Gaming Laboratories International LLC, known as GLI. It was part of GLI’s strand of talks on the industry, called “Illuminating Conversations”.

The pandemic had “pulled the technology forward” regarding cashless gaming, noted Mr Maida.

He mentioned GLI had worked with Resorts World Las Vegas, the various technology suppliers, and the Nevada regulators, to assist in getting new technology – including payment technology – into the property.

GLI’s Mr Maida said it had been “one of the largest projects we did during the pandemic”.

What AGEM’s Mr Prater termed the new “bells and whistles” at Resorts World Las Vegas, included the ability in theory, to pay for some non-gaming items via “cryptocurrency”.

In May, Resorts World Las Vegas and Gemini, a cryptocurrency exchange, announced a partnership to “allow patrons to use their Gemini crypto wallet to enhance the integrated resort experience”. The property later confirmed it would accept payments via cryptocurrency from its June 24 launch.

AGEM’s Mr Prater noted in his remarks: “Our industry has always lagged behind traditional industries because of the regulatory framework we have to live with.”

But he added: “The support that the [Gaming] Control Board in Nevada gave, to get those things approved” at the Genting property, “provides a road map perhaps, for other properties to upgrade” their technology.

The trade body’s boss added that while it was a matter of public record that AGEM was “in favour of payment modernisation and new technologies,” there was not “consensus” across its membership regarding its use.

“This is one where the bigger companies decided ‘let’s go it alone’,” he noted, referring to some technology suppliers.

Mr Prater added: “I don’t know how far we [the industry] can push this in three to five years…”

He noted that the American Gaming Association, a casino operator trade body, had made cashless “one of the pillars for this year,” in terms of industry initiatives.

The American Gaming Association is also a partner in the Global Gaming Expo Asia trade show and conference, that in pre-pandemic times had been held annually in Macau.

AGEM’s Mr Prater noted that when it came to moving to cashless payment for actual gambling in the casino industry, “credit cards and debit cards; those things are very sensitive from a statute, regulation and responsible gaming standpoint, so we need to tread around some of these issues; work through them.”

Regarding the development of AGEM itself, Mr Prater noted that when it started in the year 2000, it had only four member companies. Mr Prater, who joined as executive director in 2008, said it currently had 174 member companies, spread across 22 countries.

“In the 13 years I have been executive director, the global market for gaming technology has really exploded,” he noted.

A casino cruise brand reportedly controlled by Malaysian entrepreneur Lim Kok Thay is to launch services from Singapore fewer than five months after the Lim family-founded Dream Cruises brand of the... END_OF_DOCUMENT_TOKEN_TO_BE_REPLACED