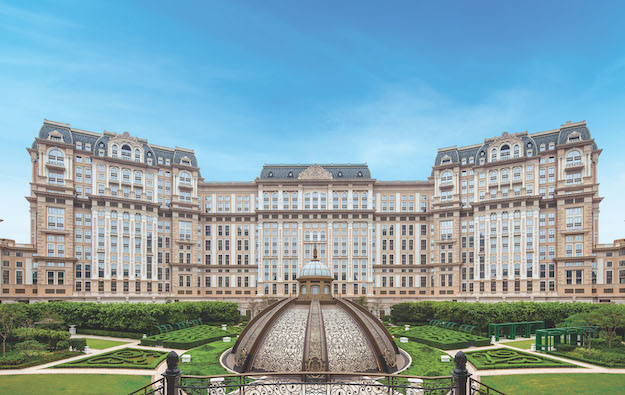 The accommodation licence for the self-branded Grand Lisboa Palace hotel, at the yet-to-be launched Cotai casino resort of the same name (pictured), had “not been issued” as of Friday, said the Macao Government Tourism Office (MGTO) in an emailed reply to GGRAsia that day.

The tourism bureau added: “Furthermore, the licensing process is still under way for all non-gaming amenities at Grand Lisboa Palace.”

According to the first-quarter highlights of Grand Lisboa Palace’s Hong Kong-listed promoter SJM Holdings Ltd, published in May, the HKD39-billion (US$5-billion) property was due to open in the first half this year.

In a July 15 release about some of the non-gaming attractions at the property, the company stated only that the Cotai property would be launched “soon”.

In comments published by the Hong Kong Economic Journal on July 19, Ambrose So Shu Fai, vice-chairman and chief executive of SJM Holdings, said the group would not wait for the resumption of normal travel links between Macau, Hong Kong and mainland China in order to open the Grand Lisboa Palace complex.

He added that the property would open in phases. Mr So did not say when the first phase of the resort would be launched.

Casino equipment supplier Sega Sammy Creation Inc said in a Friday release it was debuting its Genesis Crest 43J cabinet in Asia. The product will be available at an in-person trade show, G2E Asia:... END_OF_DOCUMENT_TOKEN_TO_BE_REPLACED