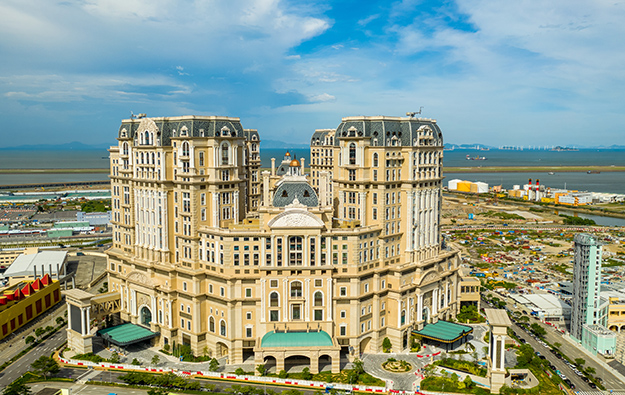 Macau casino operator SJM Holdings Ltd is opening its Grand Lisboa Palace resort today (July 30) at 12 noon, the firm said in a press release. The property will be launched in phases: the first phase, available from today, includes the casino, which has been granted a total of 150 mass, new-to-market gaming tables, and authorised to operate 1,200 slot machines.

The first phase of the Cotai scheme also includes about 300 guest rooms at the Grand Lisboa Palace Macau hotel, some restaurants and space for events.

The HKD39-billion (US$5-billion) Grand Lisboa Palace casino resort (pictured in a file photo) is SJM Holdings’ first foray into Macau’s Cotai district. The property was originally expected to open by “the end of 2020”, according to previous company information.

Macau’s casino regulator, the Gaming Inspection and Coordination Bureau (DICJ), confirmed in a reply to GGRAsia it had granted SJM Holdings a total of 150 new-to-market gaming tables for Grand Lisboa Palace at opening. The bureau added that all new tables granted were for mass-market gaming. There was no new table allocation for VIP play.

In comments to media on Wednesday, SJM Holdings chairman Daisy Ho Chiu Fung had already stated that Grand Lisboa Palace would receive 150 new-to-market casino tables. Ms Ho however did not specify how many gaming tables would be on offer to the public when the casino opens: the company can opt to not fully use the new table allocation, and it also has the option to reallocate to Grand Lisboa Palace’s gaming venue part of its inventory available elsewhere including VIP tables.

The filing added that the regulator had “approved the installation of 1,200 new slot machines [at Grand Lisboa Palace], with specific limits on the numbers that can be installed and be in operation at the time of opening.”

“Then the rest of the rooms will be gradually coming into service, depending on actual demand,” Ms Ho added on Wednesday.

The opening of Grand Lisboa Palace is taking place at a moment of increased travel restrictions between Macau and mainland China. With effect from the stroke of midnight on Saturday (July 31), people intending to enter Macau on a direct flight from mainland China must hold a nucleic acid test certificate issued within 48 hours proving they are ‘negative’ for Covid-19 infection.

The Macau authorities have also recently added new locations to the list of places on the mainland where departing travellers must do a 14-day quarantine on arrival in Macau.

The imminent return of package tours from mainland China will not only help boost Macau’s tourism businesses, but is also expected to help casinos gain more foot traffic in their mass gaming... END_OF_DOCUMENT_TOKEN_TO_BE_REPLACED