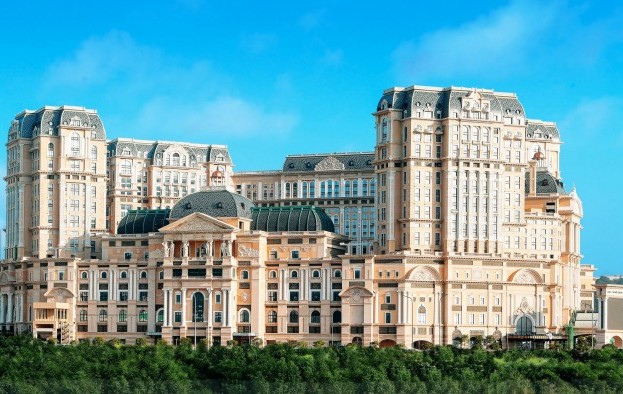 Speaking to reporters on the sidelines of a corporate event, Ms Ho said the company was aiming to launch on Friday the casino at the Cotai scheme, as well as about 300 hotel rooms and some restaurants. She said additionally that the group had been granted 150 new-to-market gaming tables, but did not specify how many gaming tables would be on offer to the public when the casino opens.

“We are targeting to open [part of the property] on July 30,” said Ms Ho, adding that the launch of the Grand Lisboa Palace will be done “in phases”.

The complex is to feature about 1,900 hotel rooms and suites in three hotel towers, including a Grand Lisboa Palace Hotel, a “Palazzo Versace”-branded hotel, and a “Karl Lagerfeld”-branded hotel.

Ms Ho said the group would “first launch” some 300 rooms of the Grand Lisboa Palace Hotel. “Then the rest of the rooms will be gradually coming into service, depending on actual demand,” she added.

The hotel rooms would not be restricted “to invited guests” once the complex opens on Friday, but the booking engine on the property’s website is not yet available, explained the executive.

Aside from the casino and the hotel rooms at the Grand Lisboa Palace Hotel, a number of restaurants are also expected to launch on July 30. Ms Ho said the licensing process for these venues was “very, very close” to be completed.

The Macao Government Tourism Office (MGTO) said last week in an emailed reply to GGRAsia that the licensing process for all non-gaming amenities at Grand Lisboa Palace – including the accommodation licence for the self-branded hotel of the same name - was “still under way”.

In her Wednesday remarks, the SJM Holdings chairman said the group’s “casino operations team has been making a lot of preparations” regarding the split of gaming tables for respectively the mass-market and VIP segments.

She also said the allocation of tables for the VIP segment “depends on a combination of things,” not only on the return to Macau of travellers from Hong Kong.

“I don’t think our VIP customers come only from Hong Kong; the [existing] travel restrictions are also a major determining factor” on how the company will allocate its gaming tables, stated Ms Ho.

A number of industry analysts have mentioned in recent notes that the Macau VIP segment has been placed recently under commercial pressure, due to a combination of regulatory and pandemic-related factors.

Ms Ho said the launch of other phases of Grand Lisboa Palace would be subject to a number of factors, including the pandemic situation and related travel restrictions.

“We are hoping that within this year, by the end of the year, we will be able to open up the entire property. That includes the Karl Lagerfeld and [Palazzo] Versace [hotel towers],” said the executive, “There will be a grand opening ceremony [for Grand Lisboa Palace], but that will depend on the existing travel restrictions.”

Ms Ho said additionally that SJM Holdings did not rule out the possibility of opening a self-promoted casino at the Lisboeta Macau complex, a leisure resort project next door to Grand Lisboa Palace.

“Nothing is impossible… Once we’ve opened Grand Lisboa Palace, then we will start looking at that possibility,” she remarked.

SJM Holdings’ vice-chairman and chief executive, Ambrose So Shu Fai, made similar remarks in an interview with Hong Kong-based Chinese-language news outlet Ming Pao. Mr So said that the casinos at Lisboeta Macau and Grand Lisboa Palace would cater for different customer segments, but added that SJM Holdings had not yet reached an agreement with the owners of Lisboeta Macau regarding operating a casino at the latter property.

The imminent return of package tours from mainland China will not only help boost Macau’s tourism businesses, but is also expected to help casinos gain more foot traffic in their mass gaming... END_OF_DOCUMENT_TOKEN_TO_BE_REPLACED